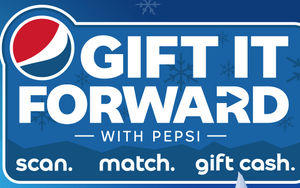 Pepsi wants people to feel better about giving cash as a holiday gift, introducing a digital scratch-off promotion in which QR codes can be scanned to win money that can be gifted to others or the company’s national charitable partner, United Way.

“Gift it Forward with Pepsi” encourages consumers to scan codes on a variety of Pepsi-branded beverage packages. If three Pepsi globes are revealed, cash winnings ranging from $5 to $25,000 can be gifted to anyone of the winner’s choosing, with Pepsi handling the money transfer.

In-stadium activations of the promotion will begin at select National Football League and National Hockey League games beginning in mid-November, in a takeoff on “kiss cams.” One fan who is drinking a Pepsi beverage will be chosen at random and offered cash — with the option of keeping it or gifting 10 times the cash amount to another row in the stadium, as a Jumbotron captures all the action.

The promotion, which runs through the end of the year, is anchored in consumer insights that finding the right gift to give can be stressful and that giving cash is not always looked upon favorably, according to Pepsi vice president of marketing Todd Kaplan.

“We think this program can step-change how people go about holiday gift-giving by enabling them to unapologetically give the gift of cash,” Kaplan tells Marketing Daily. “The truth is, it gives people the power to buy whatever they want, skip retail lines and avoid the possibility of a potential return.”

Every person who plays “Gift it Forward with Pepsi” and registers for an account on the dedicated website is entered into a weekly Grand Prize Drawing. Eight winners will receive a four-day trip to Puerto Rico, all expenses paid by Pepsi, JetBlue and Marriott.

In addition to United Way, cash winnings can be gifted to the regional charity Feeding The Carolinas, which supplies food banks in both states.

Pepsi worked with creative agency Motive to create and execute the promotion.