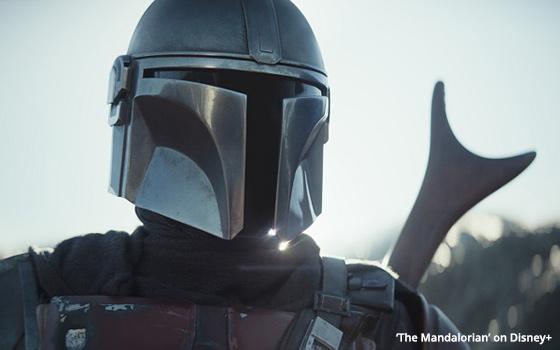 The title character in “The Mandalorian,” the “Star Wars”-linked new series that can only be watched on Disney’s new subscription streaming service Disney+, is a bounty hunter in a helmet and steel armor with a voice like Clint Eastwood's.

Yes, “Stars Wars” universe fans, “The Mandalorian” would appear to be, at least in part, The Man With No Name (sometimes called just No Name) from “A Fistful of Dollars,” “For a Few Dollars More” and “The Good, The Bad And The Ugly.”

If memory serves, of those three movies, Eastwood’s No Name character was a bounty hunter in only one of them (“For a Few Dollars More”).

And yet, the Mandalorian character (played fully concealed in head-to-toe armor by Pedro Pascal, pictured above) reminded me more of “The Outlaw Josey Wales,” in which Eastwood was an outlaw being pursued by bounty hunters.

“Dyin’ ain’t much of a livin’, boy,” Josey told one bounty hunter through clenched teeth, just before blowing him away.

Come to think of it, this Mandalorian bounty hunter is a man of few words and does not seem to possess a name either. And like various Clint Eastwood characters over the decades, the Mandalorian is more than capable of clearing a room of bad guys merely by being faster on the draw than all of them.

Speaking of old-movie homages, a shootout in the series premiere of “The Mandalorian” is almost certainly a salute to the final sequence of “Butch Cassidy and the Sundance Kid,” in which Butch and Sundance have a lengthy gun battle with Bolivian Federales who greatly outnumber them.

The shootout in “The Mandalorian” has the title character and a temporary partner -- a bounty hunter ’droid -- engaged in an almost identical pitched battle in a setting that is a dead ringer for the last stand of Butch and Sundance. Though the sequence in “The Mandalorian” turns out differently, the similarities are unmistakable.

There may be references in Episode One to all sorts of characters and plots from “Star Wars” movies that would elude the uninitiated. But there is one character known to just about everyone who seems to make an appearance at the conclusion of Episode One, creating tantalizing possibilities for Episode Two and beyond.

Which is to say: Episode One of “The Mandalorian” makes a good start on this series, which seemed to be the most highly anticipated of all the original content Disney has produced exclusively for its new subscription streaming service that premiered Tuesday.

But will “The Mandalorian” emerge as the potent driver of subscriptions that Disney+ hopes it will be? Don’t ask me. Ask a “Star Wars” fan.

television
1 comment about "Disney's 'Mandalorian' Is Clint Eastwood In Outer Space".
Check to receive email when comments are posted.
Next story loading