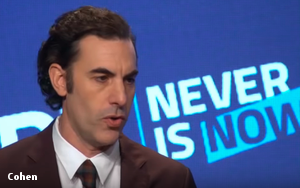 Given what most of you do for a living, that headline may seem pretty obvious. Ad pros know better than anyone that reach, even when it is “earned,” doesn’t come cheap, much less for free.

But that’s precisely the case the big digital platforms have been making to fend off criticism about why they don’t censor users, even when they use their platforms to distribute vile and destructive speech that hurts our society.

That headline comes from a speech Sacha Baron Cohen delivered while receiving an award from the Anti-Defamation League this week. You can read a transcription of it in an accompanying op-ed we’re publishing today, but I’d like to use this column to raise questions about our industry’s responsibility in supporting and underwriting the distribution of the worst kind of speech.

After all, without advertising there would be no economic foundation for the platforms -- what Cohen calls “The Digital Six” -- to even exist, much less propagate to the point that they arguably are now more powerful than the laws of any sovereign nation, including democratic ones.

I have felt for some time that the ad industry has been aiding and abetting the spread of these platforms with a careless disregard -- indeed, a negligence -- for the unintended consequences it is creating by spreading hate, violence, demagoguery, and undermining democracy in the process.

It’s almost like a case of mass industrial Stockholm Syndrome, where the most powerful companies in the world (mass marketers) have ceded their power to a handful of Silicon Valley executives on the assumption that they won’t “be evil,” or if they break things, that they’ll do it “fast.”

In this post-”transparency” era of ad industry enlightenment, don’t you think it’s time we start examining the economic role Madison Avenue plays in the unintended consequences of the media companies it funds, even if those companies call themselves “platforms,” not “publishers?”

If the platforms won’t self-regulate. And if our governments won’t or don’t have the capacity to regulate them, maybe our part of industry can put enough economic pressure on them to do what’s necessary to make the world a safer place.

I recommend you read or watch Cohen’s speech, not just because he’s a gifted entertainer who takes down the “bullshit” anti-regulatory defenses of Facebook’s Mark Zuckerberg more articulately than anyone I've heard to date, but because he reminds us about what we’re really unleashing here and that we don’t have a lot of time if we’re going to do anything about it.

I don’t know what an ad industry solution should look like, but I think real economic pressure may be the only way to make the platforms take notice and take some action, if for no better reason than their shareholders ask them to.

This is not a politically partisan issue. And it’s one any decent person or corporate citizen should agree on.

As Cohen says: “Sadly, there will always be racists, misogynists, anti-Semites and child abusers, but I think we can all agree that we should not be giving bigots and pedophiles a free platform to amplify their views and target their victims.”