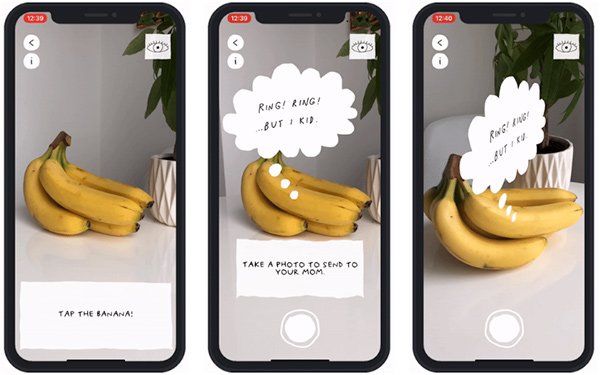 Building on its collection of cartoons, The New Yorker unveiled a new AR feature this week called “Animate Objects.” The feature is available on the New Yorker Today app.

The collection includes the thoughts of more than 30 objects, including strawberries, street signs and bagels. In one example published on the site, a bunch of bananas appear with a thought bubble appearing above it reading: “Ring! Ring!... But I kid.”

" 'Animate Objects' is only the latest development in a series of innovative interactive projects The New Yorker has produced,” Monica Racic, The New Yorker’s director of production and multimedia, told Publisher’s Daily.

“With each feature, we demonstrate creative ways to apply new technology that is an extension of the great storytelling tradition for which the magazine is known. In this case, we're using augmented reality to bring the wry and hyper-aware sensibility of our cartoonist, Liana Finck, into your everyday world in a delightful way."

Racic describes the app has having a “scavenger-hunt quality to it” that depends on the user's environment.

When a user uncovers an object, it can be shared on social media under the hashtag #AnimateObjects.