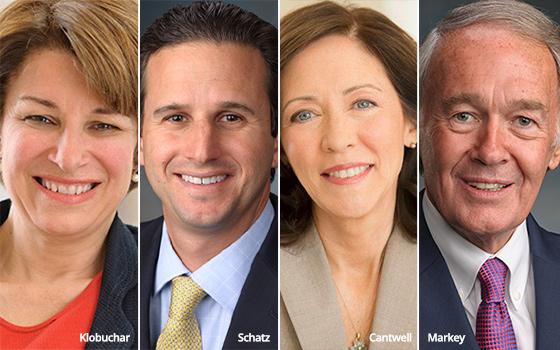 A privacy bill introduced Tuesday by four Democrats on the Senate Commerce Committee would give consumers new rights to control how their data is collected and used.

The measure provides that companies must obtain consumers' affirmative consent before transferring “sensitive” data -- which is broadly defined as including web-browsing activity across sites. The bill's definition of sensitive data also includes biometric information and precise location data.

Justin Brookman, director of privacy and technology policy at Consumer Reports, says most ad tracking would probably be covered.

The law “could lead to constant pop-up consent screens on websites like we’ve seen in Europe,” he writes on Medium. “However, the bill sets conditions for affirmative consent that many of today’s cookie consent screens would not meet."

Cantwell's proposed bill would not override stronger state laws. The measure would also allow consumers to sue over violations.

“When consumers have the ability to advocate for themselves, they are better protected against abuse,” a one-page summary of the bill states.

The measure also includes provisions that would prohibit companies from serving ads for housing, employment, credit or education based on people's actual or perceived race, religion, sex or other factors that would violate civil rights laws.

The ad industry group Privacy for America stated that the bill “offers a solid basis for discussion moving forward.”

But the group added: “As currently constructed, the bill would allow a patchwork of state laws and not produce the strong, single set of consumer protections that would preserve the economies of scale, consumer benefits, and innovation that accompany the responsible use of data.”