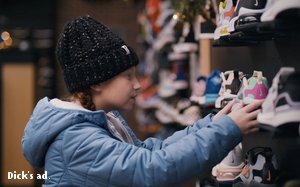 Business has been so solid Dick’s says it is raising its financial targets.

The Pittsburgh-based retailer is rolling out its holiday campaign, starring a computer-generated sneaker looking to make some new friends.

The company says gains came in the form of both average ticket size as well as more transactions, and that it grew in its three primary categories of hardlines, apparel and footwear.

“The momentum in our stores continued to build with our focus on service standards, recognition of great results and stronger marketing,” says Lauren R. Hobart, president, in the announcement.

Some experts say the gains are due to Dick’s stepped-up investments in stores, which have boosted relevance and engagement.

“One of the beneficial steps Dick’s has taken over the past half-year is to reallocate floorspace away from underperforming categories to products that are more in demand,” writes analyst Neil Saunders, managing director of GlobalData Retail, in his report.

“This has been done on a local basis. On top of this, there have been improvements in visual merchandising, and stores are now looking neater and more inspirational–especially in the most important sporting categories.”

Saunders says that while Dick’s is still vulnerable to specialty stores like Lululemon, he thinks it is also benefiting from softness at more general chains, such as Kohl’s. And he says Dick’s is well-positioned to gain from Nike’s recent decision to pull back from distribution on Amazon. “In our view, this gives Dick’s more of an opportunity to drive sales through its own online business.”

The ad, from Anomaly, features a new Nike Air Max 270 React as it gets into all kinds of after-hours shenanigans.

It was co-directed by “Night at the Museum” director Shawn Levy and “Easy A” director Will Gluck, who call it  “a love letter to the secret life of objects and the wonderment that they can bring” in the brand’s announcement.