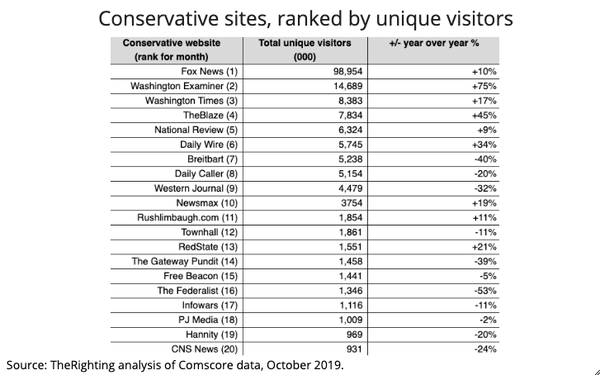 Foxnews.com continues to dominate the pack of conservative news publishing sites, according to the latest installment of tracking data from TheRighting.

The analysis, which tracks changes in the volume of unique visitors for the major conservative publishers, shows Foxnews.com increased by 10% in October vs. the same month a year earlier.

“A 10% increase for a site with a such a large base shows growing consumer desire for Foxnews.com content,” states TheRighting Publisher Howard Polskin.  “What’s even more significant is that the news environment last month was relatively placid especially compared to October 2018 when stories like the confirmation of Brett Kavanaugh, the murder of Jamal Khasshogi and the massacre at the Pittsburgh synagogue dominated headlines and captured the public’s attention.”