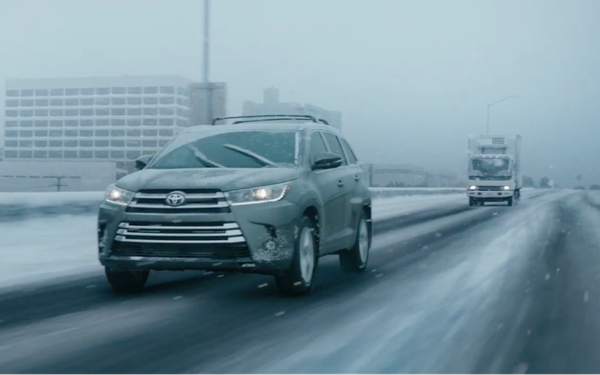 Toyota focuses on family togetherness for its annual holiday TV spot, which will air tonight during NBC’s prime-time special “Christmas in Rockefeller Center.”

The 90-second “Yellow Paper” features service members returning home for the holidays after a military deployment, to be welcomed at the airport with the iconic yellow ribbon, displayed in the terminal in a special way.

The greeting evokes pure emotion from the uniformed service members, many of whom are actual veterans.

The ad was created by Saatchi & Saatchi and directed by Sean Meehan of Arts & Sciences.

The spot broke during NBC’s Sunday Night Football “Thanksgiving Special.” It airs tonight with a personalized setup from a show host.

“We’re looking forward to sharing a message that brings people together and speaks to the joy and spirit of the season,” says Ed Laukes, group vice president, Toyota marketing, Toyota Motor North America, in a release. “Homecoming surprises are a great example of this message."

A mix of 30-second and 60-second versions will air through Jan. 2, including on NBC Sunday Night Football halftimes throughout December.

Movie-goers can also see a 60-second version for in-cinema play in National CineMedia pre-show and Screenvision in more than 3,600 theaters nationwide from Dec. 13-26.

automotive, holiday
1 comment about "Toyota Pulls At Heartstrings With Holiday Effort".
Check to receive email when comments are posted.
Next story loading