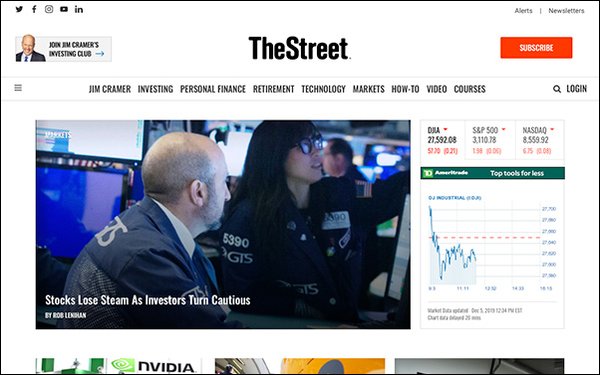 Financial news brand TheStreet has spent the past few months revamping its website and mobile platforms resulting in a smoother, faster experience for readers.

Maven acquired TheStreet, founded by Jim Cramer in 1996, last August, then worked on re-platforming and redesigning the brand in the same way it’s done with Sports Illustrated.

According to Bill Sornsin, executive vice-president of Maven, the transition of TheStreet to a new platform, along with the redesign, has improved page-load speed and ad viewability.

Average page load times for the entire site decreased to 3.8 seconds, Sornsin shared, down from 9.5 seconds before the redesign. Load time for a story or article now clocks in at two seconds, rather than the previous 12 seconds. The site also boasts better video and social engagement.

Mobile users can expect the same improvements to their experience, thanks to a mobile-friendly CMS.

“Additionally, ad placements were refined and viewability was improved,” Sornsin told Publishers Daily. “Combined with the performance improvements, this provides a high-quality ad environment for our partners and leads to stronger monetization.”

As the vertical unveils its new site, it also welcomes a new member to its portfolio of financial news and learning destinations: ETF Focus, led by David Dierking.

Over the next few weeks, Maven financial destinations Stan the Annuity Man, Mish Talk and The Progressive Investor are also slated to join TheStreet.

The new collection of financial outlets will “provide a well-rounded, first-choice financial-information resource for everyone from investment professionals to people just beginning their learning journey in finance,” said Sornsin.

The Maven counts 270 independent publisher partners across its platform and claims 100 million monthly users. In addition to TheStreet and Sports Illustrated, the Maven also acquired HubPages and Say Media this year and merged the brands.