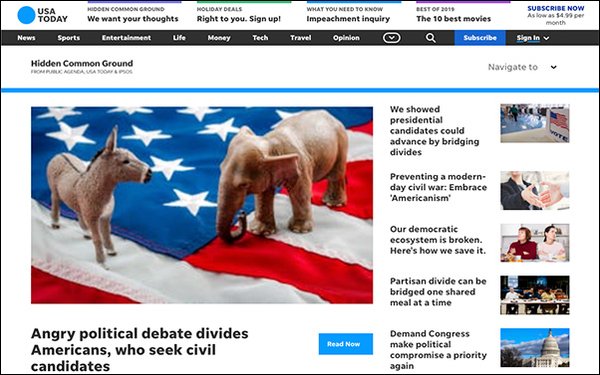 USA Today is partnering with nonpartisan, nonprofit research organization Public Agenda and research firm Ipsos on a new project aimed at exploring the issues dividing America, as the country gears up for the 2020 presidential election.

The initiative launched today with a Public Agenda/USA Today/Ipsos poll that found Americans believe political divisiveness is harming democracy. In the coming months, Public Agenda and Ipsos will produce research and analysis on issues facing the American electorate.

The results will be available at USATODAY.com and in a monthly special report in the print edition of USA Today.

The online poll of 1,548 adults found nine out of 10 respondents say it’s important for the United States to reduce the divide.

Three in four say there is more common ground among the American people than is typically recognized.  One in 10 respondents say political divisiveness is making them sad, anxious or depressed.

Almost 40% of Republicans and nearly 50% of Democrats say they would be tempted to cross party lines to elect a leader who helps bring the country together.

Opinion editor and columnist Tim Swarens, who has worked at the Indianapolis Star and Miami Herald, is joining “Hidden Common Ground” as commentary editor.

"Our goal with this project is to highlight the voices and stories of people and organizations across the country that are working together, in spite of their differences, to find solutions to problems facing their communities and our nation,” Swarens stated.

In the first installment of "Hidden Common Ground," USA Today Washington bureau chief Susan Page reports on the divisiveness in American politics and what citizens want to see in public life. Upcoming installments will compare where presidential candidates stand on each issue.

USA Today is also partnering with the National Issues Forums Institute to host a series of moderated, online forums. Public forums across the U.S. are planned throughout next year.

The "Hidden Common Ground" project is supported by the John S. and James L. Knight Foundation, the Charles Koch Foundation and the Rockefeller Brothers Fund.

The Kettering Foundation serves as a research partner.