Picture This: Another Day, Another Violent TV Show 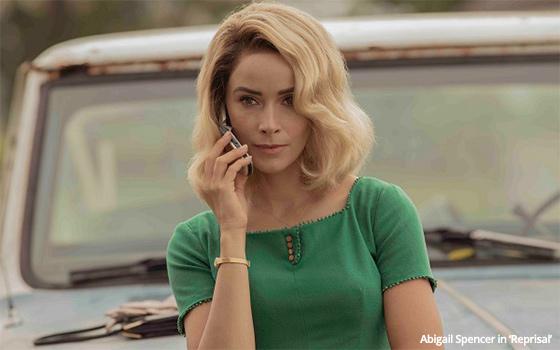 To help decorate a column about a particularly violent TV show, the TV Blog is not shy about choosing a similarly violent photo from the supply provided by the show’s network or streaming service.

Where this new revenge drama on Hulu called “Reprisal” was concerned, the choices included four different shots from various angles of one character -- a young woman stripper -- whose face and portions of her upper body and clothing were splattered with blood, some of which had apparently dried in the midst of dripping down her face.

The captions did not specify whether this blood belonged to her or someone else, but whoever it belonged to, it would have been appropriate for illustrating the subject matter here.

However, the weekly Friday TV Blog lives longer in its published position here than any of the other TV blogs published on the other weekdays. So for the sake of anyone perusing MediaPost on Friday and also over the weekend, the TV Blog chose the chaste photo above rather than jar Saturday or Sunday readers with a blood-soaked photo.

The woman pictured above happens to be the main character of “Reprisal.” She is a woman of several names played by Abigail Spencer who is seen in the first episode of this dark, violent series on the brink of putting into action a revenge scenario that she has apparently harbored for some time.

Due to a variety of events and circumstances that arise in Episode One, it is now time for her to seek reprisals against a group of men seen in a violent flashback at the outset of the series.

For this young woman -- as with so many people on TV, in movies and in real life -- she is intent on avenging the violence done to her with even more violence done to others -- not exactly the Golden Rule as I remember it.

This TV Blog takes no real position on whether her revenge plot is good or bad, or whether this series is good or bad either. In general, it is the same stylized violence most of us have seen for years in movies and television shows -- the kind of stuff we know deep down is wrong, and yet, we cannot resist.

I can think of myriad TV shows and movies over the years that are beloved precisely because of the way they depict violence using various filmmaking techniques and processes that make shootings, stabbings, slashings and beatings appear more realistic than ever before.

And we soak it up -- deriving entertainment, and even pleasure, from all of it. In fact, TV violence -- as a social subject -- is not really discussed very much anymore, if at all. It has all become so acceptable, if not downright respectable.

After all, if a movie or TV show came along that was as bloodless as the old movies of the 1930s and ’40s in which bleeding rarely resulted from bullet wounds, such movies or TV shows would be panned for their lack of realism.

But today, we have all become so used to extreme violence that TV publicists will routinely provide bloody photos for the purposes of promoting their shows.