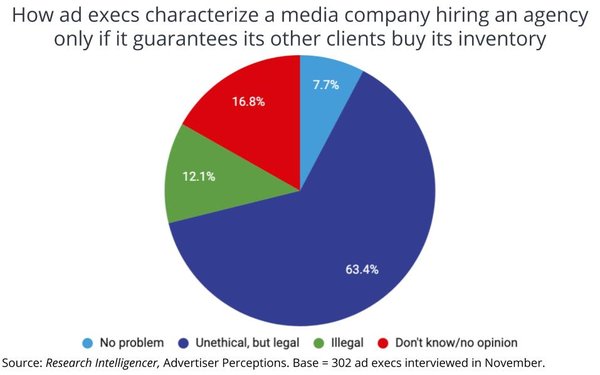 Nearly two-thirds of ad execs say terms that require an agency to commit to their other clients' ad budgets in order to win a new account are "unethical but legal," while another 12% say it is explicitly illegal.

The findings, part of a series of questions about the ethics of asking such terms in media company account pitches, was fielded by Advertiser Perceptions for Research Intelligencer in the wake of news that Disney had required agencies pitching its $1 billion media account review to commit their other clients to buying inventory on Disney's media properties.

Only 7.7% of respondents to the survey said they had "no problem" with the request, while another 16.8% said they were not sure or had no opinion about the terms of such a request.

A detailed break down of the findings, including how advertisers responded vs. agency executives, as well as explicit drill-downs, will be published later today in Research Intelligencer.

In a related move, MediaPost's Research Intelligencer is embarking on a series of studies -- both trade, as well as consumer -- analytics, and special events intended to examine the role of ethics in the advertising industry, especially in media practices.

A special briefing will be hosted today at Omnicom's Sparks & Honey to create a baseline understanding of the current culture surrounding advertising industry ethics.

Part of the briefing will be streamed live on Sparks & Honey's LinkedIn page if you'd like to watch.

If any readers have ideas for benchmarking, examining and conducting new research surrounding the ethics of advertising and media, please contact joe@mediapost.com.