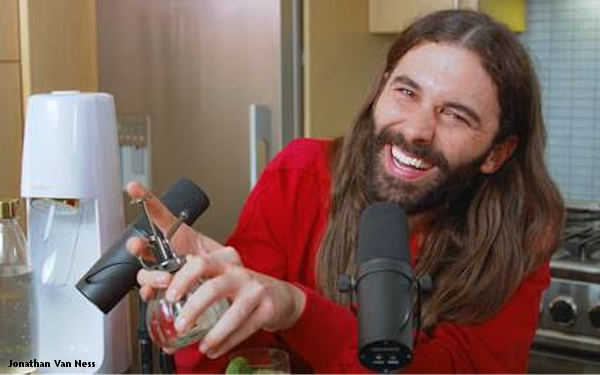 While videos that seek to generate a relaxing “autonomous sensory meridian response” in viewers can be found all over YouTube, when television personality Jonathan Van Ness creates his own ASMR effort for Pepsico’s SodaStream, it’s an (intentionally) laughable mess.

The ostensible reason for Van Ness’ first attempt at ASMR is to help people relax during the holidays with the aid of a SodaStream machine, which carbonates tap water and reduces bottle waste.

In a two-minute video, Van Ness acknowledges how stressful the holidays can be and offers to share the sounds that “make me feel very, very, very, very relaxed” as he alternates between talking into two microphones.

He proceeds to carbonate a glass of water, tries to catch cucumber chunks with his mouth, grates a lemon and runs his hair over the microphones before whispering “That’s my hair in the ASMR mike. We’ve peaked!”

The hairdresser is known as the grooming expert on the Netflix series “Queer Eye” and for his work on the web series parody “Gay of Thrones.” A SodaStream spokeswoman tells Marketing Daily Van Ness was chosen because he is known for prioritizing self-care and is a natural for the “de-stressing” campaign.

“As the holidays and end of the year can be a major point of stress for most people, both SodaStream and Van Ness wanted to create something that would help everyone relax, whether that’s through the soothing ASMR sounds or laughter. Through this campaign, we hope everyone is able to release some tension.”

The campaign can be seen on Instagram, Twitter and YouTube. Although SodaStream has advertised during the Super Bowl, it’s unclear whether it will do so for Super Bowl 2020.

The Van Ness video is aimed at a wide audience -- because everyone experiences stress around the holidays -- but it “does skew to a millennial demographic,” says the spokeswoman. “The goal is to introduce fans who follow Van Ness and ASMR to the healthier, more sustainable lifestyle made easier by SodaStream.”

Pepsico acquired SodaStream International in 2018 for a reported $3.2 billion as one of its many sustainability initiatives under the Beyond The Bottle banner.