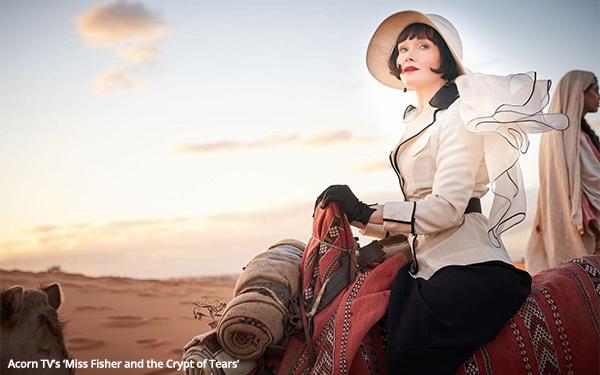 Acorn TV, part of AMC Networks' SVOD offerings, has transformed one of its TV shows into a feature film.

“Miss Fisher and the Crypt of Tears,” based on the international hit and best-selling murder mystery books, premieres at the Palm Springs International Film Festival January 4. Post-screening, it arrives in U.S. theaters and on the streaming service in March 2020.

A Twenties’ flapper, the Australian Fisher is a female cross between The Saint and James Bond: unstoppable, unbeatable and unapologetic. She can fly a plane, dance a sultry tango and has a taste for white peaches and green chartreuse liqueur. A large income, exquisitely furnished Victorian home and flirtatious charm doesn’t hurt, either.

Essie Davis stars as the inimitable detective, in addition to a role in "Game of Thrones." In "Crypt of Tears," filmed on location in Melbourne, Australia, and Morocco, she tracks murder and mystery from London to British Palestine.

Her TV co-stars, Nathan Page and Ashleigh Cummings are featured, as well.

"Miss Fisher" has a huge fan base in the U.S. and they are clamoring to see her on the big screen, as are her legions of Australian fans," said executive producers Fiona Eagger and Deb Cox.

Don Klees, vice president of programming for the Acorn brands, added: "Australia continues to produce first-rate programs, and Acorn TV remains a leading destination for bringing them to U.S. audiences."

AMC Networks has made its targeted SVOD services a critical part of its revenue strategy. CEO Josh Sapan told investors in October: "We are able to achieve scale at much lower subscriber levels. As a result, our subscribers have very attractive long-term values."

In July, AMC Networks bought RLJ Entertainment — the parent company of Acorn and UMC. The service is available on Amazon Channels, Xfinity On Demand and directly on their respective websites.