Larry David, Man With A Fortune, Still Curbing His Enthusiasm 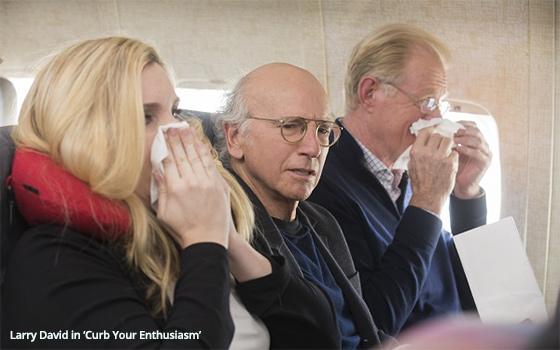 He possesses a fortune said to be worth at least $400 million, so what does Larry David have to complain about?

Most likely, he will find something in the new season of “Curb Your Enthusiasm” coming to HBO in January, the first month of the year 2020 -- nearly 20 years since the show premiered in October 2000.

Larry David the sitcom character (if not the real guy) is a complainer. This is where his comedy comes from. But for how much longer can a man who lives without financial worries continue making the same old mountains out of trivial molehills?

Apparently, as far as HBO is concerned, he can continue doing it for as long as he wants, whenever he wants.

HBO announced on Wednesday that “Curb” would be coming back for a 10th season. Just like the sudden appearance of the ninth season in 2017 after an absence of six years, this new announcement came from out of the blue.

The press release was terse -- no details such as guest stars, comedic situations or even the number of episodes. The premiere date is Sunday, Jan. 19.

When “Curb Your Enthusiasm” premiered, David was 53 years old. It was just over two years since the finale of “Seinfeld,” the show from which he made his first fortune (and continues making one).

One morning in the early spring of 2000, I was placidly seated in my cubicle at the newspaper where I once worked, idly watching something on television (it may have been “Jerry Springer” or the Three Stooges -- I don't remember which) and I looked up to see Jerry Seinfeld casually strolling by my desk. I have no idea why he was visiting our newsroom that day.

I introduced myself and in the brief conversation we ended up having, he alerted me to the arrival later that year of the funniest TV comedy he had ever seen -- even better than “Seinfeld,” he may have said (or implied). It was “Curb Your Enthusiasm,” which his friend Larry had apparently shown him in advance.

I had never heard of the show at all since it was some months before HBO would begin promoting it. Thus, I can truthfully say that the first time I ever heard about “Curb Your Enthusiasm,” it was because Jerry Seinfeld told me about it.

Here in the present day, Larry David is 72 years old and still being well-paid to write and star in his own comedy series, which has been more or less universally revered for nearly 20 years.

In an industry -- television (if not show business generally) -- that is clearly ageist when it comes to preferring younger performers and creative types over older ones, David's longevity and evident work ethic are an inspiration for anybody of a certain age who might feel their best days are behind them.

But here is Larry David, still curbing his enthusiasm at 72.
television
2 comments about "Larry David, Man With A Fortune, Still Curbing His Enthusiasm".
Check to receive email when comments are posted.
Read more comments >
Next story loading