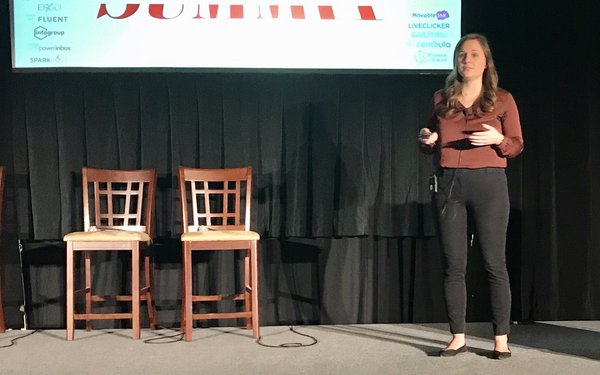 Our last day of Email Insider Summit began with a slew of internal case studies from GasBuddy, with Kristen Healy, senior manager of CRM, outlining challenges, executions, results and takeaways for several aspects of the brand's messaging channels.

For background, just in the last year, GasBuddy began offering free gas through its app as well as a Pay with GasBuddy card. Healy said these "monetary incentives [are] a sticky way to get [users] back in the app."

To make an offer personal, GasBuddy offers its paid membership 20 cents off per gallon as well as roadside assistance for a monthly fee. Yet, 95% of users were coming from the free program; new customers were hard to get aboard. So the brand decided to target Pay with GasBuddy users with a personalized GasBack offer, resulting in a 5x increase in enrollments in the three months following compared to the three months prior.

To create a sense of FOMO, GasBuddy decided to offer flash sales on gas or Deal Alerts on a station-specific basis. When it saw low activation rates in the app, it decided to remind users of the money they were missing out on by not checking the app before they fill up. This resulted in 75% of users become repeat Deal Alert users. Healy said "it pays to throw money at them."

To reward a first purchase, GasBuddy created a limited-time incentive for users who signed up for free, lined their bank accounts, have a card and don't use it. This play resulted in 12% of users who opened the offer going on to make that first purchase. Push notifications work, Healy said.

The brand also found that taking the math out of the equation for the user paid off. It targeted Pay users after they made one transaction, sending a personalized up-sell message into its paid program. The open to enrollment rate was three times its normal rate from email, she said.

Location data provides value back to users in real time. GasBuddy found this out by launching a program with a station offering mobile payment using the Pay with. GasBuddy card. Users entering a geofence were targeted with push notifications on an inbox message within the GasBuddy app, reminding users about this feature. "Engagement rates were 170% higher than our benchmark mobile engagement rates for this segment of users," Healy said.

Some large chains have sponsored additional discounts for GasBuddy's Pay users. An email announces the offer details, with mobile messages reminding users. The brand geo-targeted with convenience store Wawa for a real-time push motivation to drive continued awareness, resulting in engagement rates for mobile 145% higher than the benchmark.

Healy said that targeted mobile messages sent at the right time have contributed to fast improvements, including a 40% utilization increase month over month. And, she added, the creative was easy to put together. She advises focusing on more real-time mobile targeting for station-specific discount and on the priority of messages based on users' preferences or behaviors.