Flip'd By IHOP Will Cater To Urbanites Craving Fresh Fast-Casual 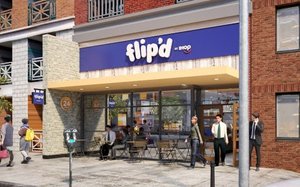 After assaying the urban fast-casual scene, International House of Pancakes, LLC announced yesterday it is opening a new chain of restaurants called Flip’d by IHOP, starting with an outlet in Atlanta next spring. It then intends to expand to bustling markets including Chicago, Boston, Dallas and New York City, offering freshly made breakfast foods and beverages -- to stay or to go -- around the clock.

“Flip’d is IHOP’s answer to consumer demand in dense cities. A Flip’d restaurant is about half of the size of a typical IHOP, with less seating and no wait staff to take orders, according to [newly installed IHOP president Jay] Johns. Customers can order their food via a digital kiosk or move through assembly line at the counter. Online ordering for pick-up or delivery will also be available as part of an effort to keep growing IHOP’s off-premise business,”  writes  CNBC’s Amelia Lucas.

“Johns noted that while there is demand for IHOP in cities, franchise operators have generally found it prohibitively expensive to open those restaurants -- which are usually over 4,000 square feet -- in urban areas. ‘Having a smaller footprint will be a better investment for them,’ he said. There are more than 1,700 IHOP locations in the United States,” Danielle Wiener-Bronner reports  for CNN Business.

“For IHOP, new restaurants like Flip’d are part of a three-pronged growth plan. The chain is also targeting off-premise dining and promoting its non-breakfast food items -- like burgers -- to draw more customers into stores,” Wiener-Bronner adds.

“Inspired by its breakfast-centric parent chain, Flip’d by IHOP will offer the restaurant’s famous buttermilk pancakes, served up in made-to-order, takeout-friendly ‘Pancake Bowls,’ and garnished with toppings like scrambled eggs, bacon and cheese or, alternatively, fresh berries,” Janine Puhak elaborates for Fox News.

“Every restaurant has its own vibe. When I want to eat endless pasta and gossip with my friends, I go to Olive Garden. When I want a quick coffee, I pop into a Starbucks. And when I want to eat a stack of pancakes the size of my head and sink into a cozy booth, you know I'm going to IHOP, baby. But the hallowed International House of Pancakes is launching a new chain of restaurants and it just might fit into a whole new category…,” is Kristin Salaky’s take on the announcement for Delish. “From the photos, it looks a bit more like a Chipotle than your traditional IHOP.”

The Takeout’s Grace Perry leads her story with: “We’ve all been there: living our busy, urban lives, simply trying to have it all, with only a few minutes to squeeze in a quick lunch between our important business meetings. We scroll through the lackluster options on our food delivery app, and think to ourselves: ‘I want food that’s made efficiently. I want something I can eat on-the-go. And, above all, what I really want is something called a Pancake Bowl.’ Well, finally, the future will finally arrive sometime this spring,” she writes.

But at the end, Perry concludes, pancakes are for weekends and are “not to be eaten in a rush. But I have a terrifying feeling America’s going to disagree with me on that one.”

“One of the things that we really believe is that a lot of people have a habit of going to get their breakfast wherever they get their coffee, and they settle for potentially substandard food that happens to be there,” IHOP CEO Johns tells CNN’s Lucas. “We’re going to flip that, flip that expectation.”

Then again, there’s a certain comfort derived from walking into the same deli — day after day, year after plodding year -- and hearing the same counterperson ask you the same question as you shuffle, bleary-eyed, to the head of the line: “Reglah no shugah and a buttahed bun?”