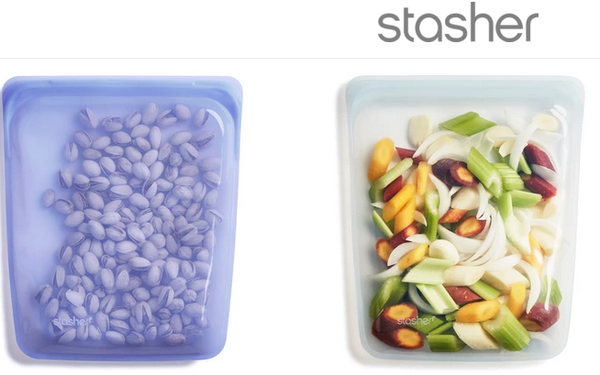 SC. Johnson is acquiring Stasher bags, which markets environmentally friendly  silicone storage containers for foodstuffs, which can be used thousands of times and popped into freezers, microwaves and dishwashers without harm.

The product may or may not compete with SC Johnson’s Ziploc, though it may just complement it. Stasher bags are far more durable, but the initial cost is far higher, ranging from $8 to $20 each.

When founder Kat Nouri tried to get funding and publicity by appearing on ABC’s “Shark Tank” in 2018, one of the show’s would-be investors balked at that price point. But Mark Cuban was convinced and invested $400,000  in the company that made its debut at a 2016 Chicago houseware trade show.

Since then, Stasher has landed distribution deals with The Container Store and Target, among many other retailers, and it’s sold on Amazon and Walmart websites.

The big selling point seems to be  durability. Stasher says its bags can be reused 3,000 times and if customers return the old bag to them, the company will reuse it for “playground pebbles.” Its website says, “Made out of pure platinum silicone, and free of PVC, latex, fillers and byproducts, Stasher is safe for people and the planet.”

The website Practical Magic calculates that a package of 120 medium-sized Ziploc freezer bags would cost 11 cents per use, while just one 450 ml Stasher bag, bought for about $17 and used 3,000 times, ends up costing less than a penny per use.

.Stasher in addition is a California-certified green business that has to meet several requirements including rules about the kind of  copying paper and paper towels  it can purchase, and that the company prohibit employees and guests from having individual bottles of water at work.

The acquisition shows the increasing importance consumers and businesses put on environmental issues, policies and projects, even as the United States government seems to be moving away from them. Stasher’s Instagram page has 267,000 followers and is full of conservation tips and photos of Stashers at work.

No purchase price was announced and SC Johnson, a private company, would not respond to even the most basic questions about its plans for Stasher or Nouri. Stasher likewise failed to return several phone calls and emails.