Beyond CBD: The Rise Of Adaptogens, Nootropics 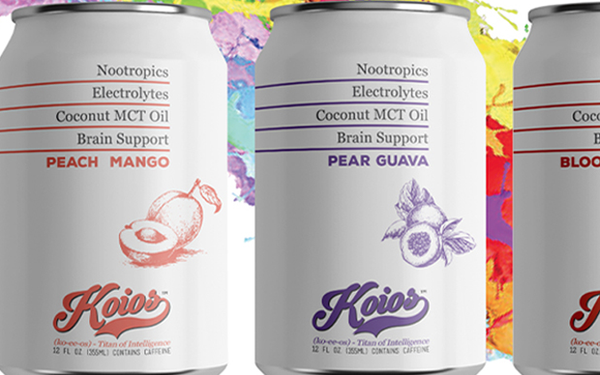 While the ongoing regulatory rodeo threatens to lasso the widespread acceptance of CBD-infused beverages and foods, a competitive space is taking root. It’s inhabited by adaptogens and nootropics (which we’ll define shortly), fueled by startups whose product benefits are said to range from relieving anxiety and stress to improving digestion.

One of the more prominent examples is that of the Koios line of beverages, whose founder was seeking an alternative to the drug Adderall when he first learned about nootropics and other functional ingredients.

As it’s very early days in the marketing of such products, CPG FYI asked Thomas Sineau, senior intelligence analyst at CB Insights, to provide an overview of some of the trends and players.

CPG FYI:Tell us about adaptogens.

Sineau: It’s things like herbs, roots and mushrooms that are basically supposed to help people with anxiety and stress management. Within that, you can include stuff that would potentially help with digestion — turmeric, for instance — but right now we see adaptogens mostly promoted for anxiety and stress in general.

Sineau: Those are substances that are aimed at improving cognitive functions. That includes alertness, focus, energy and a few others. The most common nootropic that people are likely to consume is caffeine.

CPG FYI:How would you describe consumer awareness of adaptogens and nootropics?

Sineau: It’s close to zero for the general population. You’ve got pockets of people who are aware of them, mostly in big cities like Los Angeles, San Francisco and New York where they could resonate because people are looking to jump on new trends faster and also have a bit more purchasing power to do so.

CPG FYI:What does Verb Energy do?

Sineau: Verb is basically caffeine-infused energy bars. As you know, the snack category is growing very fast, with lots of emerging trends. What they are bringing is a caffeinated one. Instead of grabbing coffee plus a snack bar, you have it all in one.

CPG FYI: How about Standard Dose?

Sineau: Standard Dose basically started as an ecommerce platform for CBD-infused products and has now expanded into other wellness products, mostly plant-based ones. The idea is to act as a curator for consumers.

They have a very strict process in place to vet all the brands that are going to be sold on their platform, as well as content to educate consumers about all of these emerging products. They also have a retail space in New York, again as part of the education process.

CPG FYI:Kin Euphorics is a functional beverage brand. How is it positioned?

Sineau: The idea is to provide an alternative to alcohol for drinking occasions. It combines the adaptogenic herb Rhodiola rosea, with several nootropics such as caffeine and 5-HTP that are supposed to make you feel euphoric — hence the name.

Meaning you’re not drunk, you’re not high. And you never wake up with a hangover and you don’t feel out of your mind, either.

CPG FYI:What exactly does the term “beauty from within” mean?

Sineau: Basically, the idea is that beauty has been a lot of creams and everything external. Over the past few years, we’ve seen a lot of different brands tapping into this idea that you are what you ingest.

A lot of supplement brands are saying they can improve your skin from within, among other beauty aspects.

Moon Juice markets plant-based powders containing adaptogens that you can dilute in any type of beverage. Certain adaptogens are meant to improve your digestion and by so doing, you’re supposed to have clearer skin and less breakouts.

CPG FYI:How would you compare CBD to adaptogens and nootropics?

Sineau: If you think about adaptogens, they’re plant-based elements, so people see them as being not harmful.

CBD also is plant-based, but there’s a connection with drugs that adaptogens don’t have. As for nootropics, people consume them every day without knowing it.

CPG FYI: There seems to be a parallel with the growth of CBD products in that it’s mainly small, mostly unknown brands that are embracing adaptogens and nootropics.

Sineau: That’s true. One reason is that the market isn’t well educated about adaptogens and nootropics. Big brands may be better off waiting for the startups to kind of educate the market and jump on the trend when it’s really picking up.