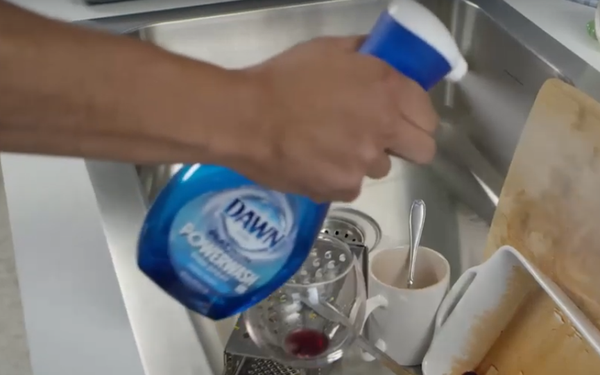 And how is that? Procter & Gamble, Dawn’s parent,  says 61% of Americans prefer the clean-as-you-go method of dishwashing, so while another part of the meal is still in the oven, homemakers wash the dishes, pots and pans they’ve already dirtied.

Regular dishwashing soap activates in water, but Powerwash is formulated to work immediately as it’s sprayed, and works five times faster than regular dish soap, according to the company.

Procter & Gamble says the new formula, which has been in development for five years, will cost about $2 more per bottle.

"We're really treating this as a revolution to the category," Kristine Decker, P&G's dish care director, told CNN.  The product is in limited distribution now, and will be available nationwide next month.

The Cincinnati-based CPG giant says Powerwash is a “first-of-its-kind dish spray, that uses a unique formula and foam sprayer combination to create suds inside a spray chamber -- allowing you to directly apply suds to dishes in one continuous spray.”

Dawn has produced other spray-ons before and still markets Dawn Erasing Dishfoam, which it advertises as best for especially greasy food preparation.

For the record, Procter & Gamble has done similar research that  finds cleaning the toilet is the “number 1 most hated task,” and dishwashing comes second.

Thinking about dish soap may seem a little old-school at a time that 68% of American homes have dishwashers, but according to the product-testing site Reviewed.com, just 20% of consumers use theirs more than once a week.

That might be because  smaller households don’t see the need for a daily wash, or because consumers think hand-washing does a better job and saves energy.  In fact, experts say consumers use more energy and water doing the dishes manually than letting the machine do it, and dishwashers do a better job of it, too.