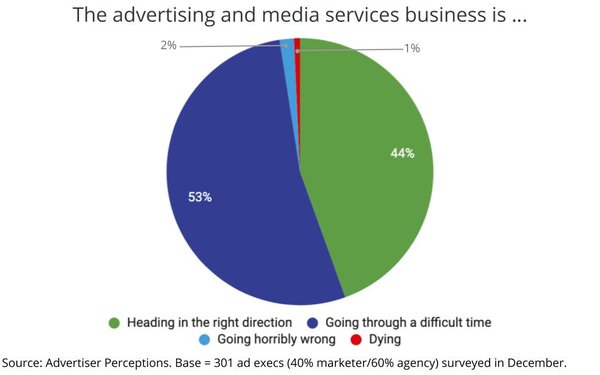 A majority of ad industry executives believe the advertising and media services business is "going through a difficult time," according to findings of interviews conducted by Advertiser Perceptions in December.

The finding, part of a series of benchmark studies Advertiser Perceptions is conducting for MediaPost heading into and throughout 2020, is intended to create a baseline of how the ad industry looks at its current state and near- and long-term future on key issues including its own esteem, perceptions of other stakeholders (including consumers, potential talent, regulators, suppliers, etc.), regulation, self-regulation, ethics and the overall impact on society.

Detailed findings of this survey, including tabulated findings by advertisers vs. agency executives, as well as their views on what the ad industry can do to make itself more attractive to key stakeholders, will be published exclusively in today's edition of Research Intelligencer, a premium MediaPost publication available only to subscribers.

Forty-four percent of total respondents to the Advertiser Perceptions study said they believe the advertising and media services industry is "heading in the right direction," while 2% say it is "going horribly wrong," and 1% said it's "dying."