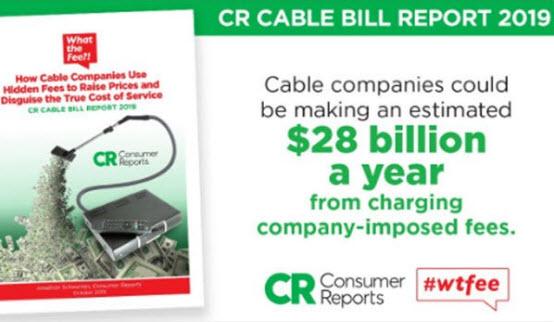 Pay-TV operators will have to inform consumers of the total price -- including itemized charges, fees and estimated taxes -- before they sign up for video packages, under legislation in the $1.3-trillion federal omnibus spending bill signed into law on Friday.

The Television Viewer Protection Act (which originated in the House as H.R. 5035) also prohibits pay-TV operators from charging consumers for equipment they don't use, and gives consumers the right to cancel service up to 24 hours after receiving notice of the total cost.

The provisions will take effect in six months, unless the Federal Communications Commission grants an additional six-month extension.

Consumer Reports, which backed the bill, reported earlier this year that “hidden” fees charged by cable companies cost consumers an average of $450 per year. The fees can include line-item charges such a “Broadcast TV Fee” or “Internet Service-Related Fee,” according to the report.

The pay-TV industry has been under fire for these billing and promotional practices for years.

In 2014, telecom analyst Bruce Kushnick famously dissected his monthly cable bill for “triple play” broadband/video/telephone service offered by Time Warner Cable (since acquired by Charter). “When I signed up, less than two years ago, it was advertised at $89.99 and today, less than two years later, the actual price is 110% more -- now $190.77,” he wrote in the Huffington Post. “Fact is -- you can never, ever get the advertised price because it doesn’t include many of the fixed costs, like the set top box, not to mention it is littered with pass-throughs of the company’s taxes and fees, including the cable franchise fees. To add insult to injury, there are a bunch of garbage, made up charges."

In addition to the billing transparency requirements, the new law replaces the 31-year-old STELAR (the Satellite Television Extension and Localism Act Reauthorization), which expired at year's end. The law, which had to be renewed every five years to keep from sunsetting, originated mainly as the compulsory license allowing satellite operators to pay a fee set by the government in order to import distant network TV station signals.

The new bill makes permanent a STELAR provision that television providers and broadcasters must negotiate retransmission fees "in good faith."

In recent years, contentious negotiations over those fees have led to a growing number of regional broadcast blackouts for consumers.

But the new law also allows major portions of STELAR -- including the ones granting satellite providers a compulsory distant-signal license in areas where over-the-air reception is too poor for residents to access local signals -- to expire after May 31.

The new law will limit that compulsory license to satellite companies that provide local programming nationwide.

The National Association of Broadcasters urged lawmakers to allow STELAR to expire, while AT&T fought to retain it.

Last week, AT&T warned that allowing STELAR to lapse could result in a loss of service for “hundreds of thousands” of satellite subscribers.

"Since 2006, retransmission fees charged by local broadcasters have skyrocketed" by more than 5000%, "nearly all of which has been passed on to consumers in the form of higher bills," Jim Cicconi, AT&T senior executive vice president of external and legislative affairs, argued in the company's public policy blog. "Rather than address this problem, Congress has instead bowed to further demands from broadcasters to eliminate... STELAR, removing hundreds of thousands of consumers' access to broadcast channels they receive today. Make no mistake, when the screens of those consumers go dark, the sole reason will be that Congress did not act to protect them."

"There is no reason for ‘screens to go dark’ as a result of the STELAR bill, as claimed by AT&T," responded National Association of Broadcasters spokesman Dennis Wharton. "Instead, AT&T's DirecTV has the opportunity as a result of STELAR to fulfill its decade-long pledge to deliver local TV to tens of thousands of viewers in 12 ‘unserved’ rural markets."

"We think it helps more people than it harms," she says.