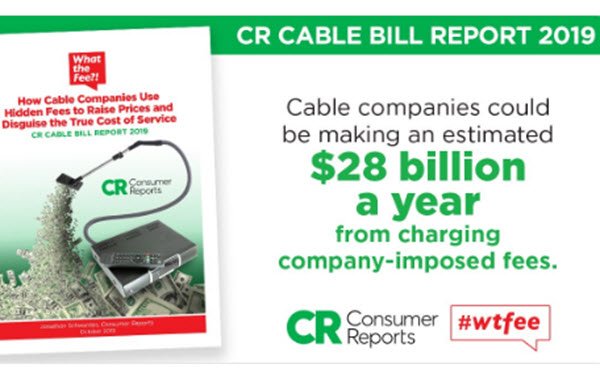 Fees not included in the monthly subscription charges promoted by cable TV companies cost customers an average $450 per year, according to an estimate in Consumer Report’s just-released Cable Bill Report 2019.

The report is unlikely to come as a shock to cable operators, many of whom have acknowledged that they’re not interested in trying to hang onto low-margin (as opposed to full-price) pay-TV subscribers anymore, as they focus on promoting lucrative, faster in-home internet service.

However, the report also serves to support CR's advocacy of a bill now in Congress that would, among other points, require that advertised subscription prices include all fees.

CR says the report is based on an analysis of nearly 800 cable bills collected from consumers around the country, and a recent, nationally representative survey of 2,057 U.S. adults.

The survey asked consumers about fees charged by utilities, airlines and hotels and online ticket vendors, as well, but found that “telecommunications providers (which includes cable companies) are the worst offender when it comes to charging unexpected or hidden fees. What a cable company advertises to a consumer as a monthly price for services, and what the consumer actually ends up paying, can be dramatically different.”

The report also asserts that cable company-imposed fees, including “Broadcast TV,” “Regional Sports Fees” and set-top box rental fees, “add what amounts to a 24% surcharge on top of the advertised price.”

“As opposed to taxes or charges for optional services, these fees are items added to a consumer’s monthly bill for things that are nothing more than a cost of doing business” the report charges. “For example, the Broadcast TV Fee is a non-optional fee that cable companies claim helps recoup their cost of obtaining programming from broadcasters. However, providing local TV channels is one of the most basic services that a cable company offers to consumers, not an optional service.”

Based on the total number of U.S. cable subscribers and its findings, CR estimates that cable companies “could be making an estimated $28 billion a year” from such fees.

The report also charges that the fees continue to escalate, citing triple-percentage increases in recent times in some fees charged by Comcast and Charter as examples.

CR acknowledges that the fees are legal if they are clearly disclosed to consumers, but contends that its findings “suggest that cable companies fail to do so in a consistent manner.” The report “also documents confusing and inaccurate statements made by cable company representatives to CR researchers and consumers,” its writers state. “For example, on more than one occasion, company-imposed fees were inaccurately described as government charges.”

It reiterates CR's support for the TRUE Fees Act, introduced in Congress in February by Sen. Ed Markey (D-Mass.). The act would amend the Communications Act of 1934 to require, among other points, that all mandatory, company-imposed fees be included in advertised prices. An earlier version of the bill, introduced in September 2018 by Rep. Anna Eshoo (D-Calif.), died in Congress.

CR also notes that the FCC has the authority to eliminate such itemized fees from the cable industry through rule-making, although that prospect also seems unlikely.

Noting investigations of Comcast billing practices by some state AGs, it contends that “more state attorneys general should use the power of their consumer protection statutes to police whether hidden fees are harming consumers.”

Finally, it points out that “fee-exhausted” consumers “can cut the cord to avoid most company-imposed fees,” although it adds that “hidden fees are starting to creep into ‘internet-only’ services packages as well.”

Shannon Murphy - Jack in the Box, Director of Digital Guest Experience
YOU MAY ALSO LIKE...
MediaPost All Stars
January 25, 2023
More from Digital News Daily