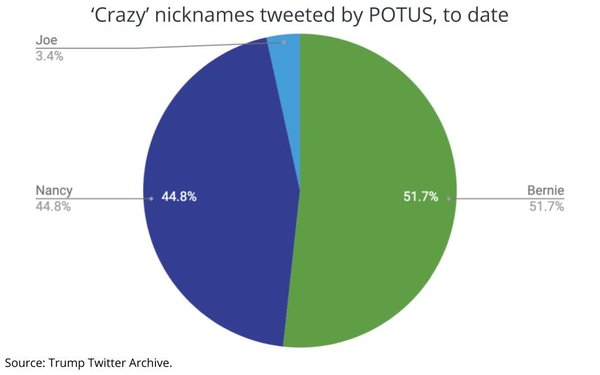 For someone who has described himself as an expert on branding, the President of the United States doesn't seem to understand the core tenets of consistency, continuity and indelibility that make for great brands. At least that appears to be the case in the way he tries to label the brands of his adversaries.

In recent weeks, he has switched from nicknaming House Speaker Nancy Pelosi "Nervous Nancy" to "Crazy Nancy" in an effort to disparage her. The problem is that it's a label he has routinely assigned to others, most notably Democratic candidate Bernie Sanders, as well as Joe Biden, and a slew of others over the years.

But when it comes to crazed presidential tweets, Pelosi is closing in on Bernie, racking up 13 to date compared with Sanders' 15.

Significantly, most (10) of the "crazy" tweets about Pelosi have come in just in the past few weeks since the House impeached the President, while the tweets about Sanders have accrued over the past few years.

It also follows a protracted period of labeling her "nervous" (13 times in the past few months), and comes nearly a year after the President branded Pelosi simply by her own name: "Nancy, as I call her."

And they are not alone. The President has described others as "crazy" 109 times since he was inaugurated.

While his strategy clearly in one of frequency and persistent messaging, the lack of consistency in who he applies it to could well lead to wear out. Either that, or he's just crazy. About using that word, of course. 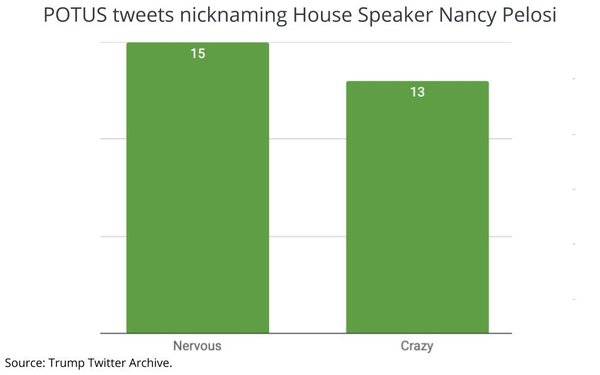