What Was The Year's Best Show? It's Gotta Be 'Sammy' On PBS 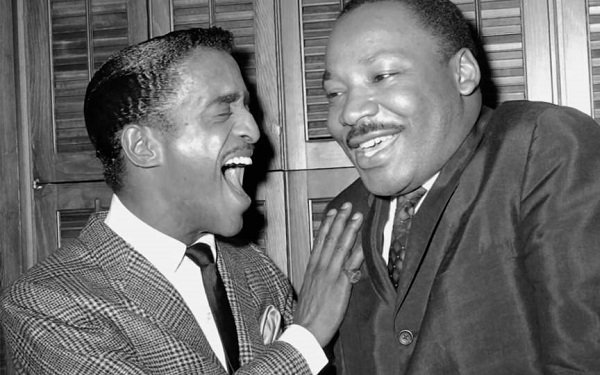 When all is said and done, the best TV show of 2019, as reflected in the reviews published here, was a PBS documentary.

While that might strike many as hopelessly unhip -- what with all the shows that come and go these days on the networks and streaming services that critics and the shows’ niche audiences all seem to rave about -- the TV Blog has never worried about hipness.

Paradoxically (or perhaps ironically), the best-reviewed show of the year here was about a man who was as hip as hip ever got. It was “American Masters -- Sammy Davis Jr.: I've Gotta Be Me,” which premiered last February.

This illuminating documentary was a hugely entertaining, warts-and-all life story. How could it not be? Sammy Davis (seen in the photo above with Martin Luther King Jr.) was one of the most incandescent entertainers of the 20th century -- a Jewish African-American who lived and worked in an era of massive social change. This documentary was as mesmerizing as he was.

Another documentary ranked high on our list of the year's best shows -- HBO’s “Breslin and Hamill: Deadline Artists.” This one was perhaps best enjoyed by those who were lucky enough to have worked in the New York newspaper world of Jimmy Breslin and Pete Hamill, an era -- and a civilization -- gone with the wind.

Although it is always difficult to single out specific shows as the very best of the best in a given year, this year's best scripted drama -- at least judging from the review of it published here -- was “On Becoming a God in Central Florida,” starring Kirsten Dunst.

“Awkward title, great show,” I wrote in the review of this show when it premiered on Showtime last August.

Another sentence in the review revealed one of the criteria that is often common to shows I like: They are dramas on a human scale, unadorned by far-out science-fiction plots, not enhanced by special effects nor splattered with blood.

“While the title smacks of pretentiousness, the show itself does not,” I wrote of this show. “It is about typical middle-class Americans and the struggles many people have when it comes to making ends meet.”

If there was a stand-out comedy this year in the TV Blog reviews, then it would have to be “The Righteous Gemstones” on HBO from the one-man laugh factory known as Danny McBride.

In our review last August, the TV Blog marveled at McBride’s uncanny ability to create and portray some of the most loathsome characters ever seen on TV while at the same time making them attractive and entertaining.

This show was a rare gem among the mostly second-rate comedies that came and went on television this year.

Other shows that came in for unequivocal praise this year included “Flack” on the network known as Pop, the new “Twilight Zone” on CBS All Access, “Deadwood: The Movie” on HBO (though it had the year's lamest title), “The Loudest Voice” on Showtime, “Pennyworth” on Epix, “Catherine the Great” on HBO, “Treadstone” on USA Network, and yes, even “Zombie Tidal Wave” on Syfy.

Looking back on the 2019 reviews, I find that perhaps due to the paucity of excellence found in the lineup of shows that made their debut this year, I gave quite a few “benefit of the doubt” reviews to many shows I might not have rated as highly in previous years.

These included “Grand Hotel,” “Emergence” and “Stumptown” on ABC, “All Rise” on CBS, “What Just Happened??! With Fred Savage” on Fox, “The Masked Singer” on Fox (perhaps the biggest surprise of all), and “Pearson” on USA Network.

Two shows this year earned special recognition for their showmanship -- “A Very Brady Renovation” on HGTV and “BH90210” on Fox.

For the “Brady” show, HGTV had to corral all six grown “Brady Bunch” kids and buy the show's old house in order to pull this show off -- which they did.

For “BH90210,” Fox had to make sure that all of the old show’s aging, surviving stars would agree to participate and then partake in a reunion series in which they would all play parodies of themselves. Mission accomplished.

Speaking of showmanship, special recognition must go to Disney, which anchored the launch of its new streaming service Disney+ with a “Star Wars” TV series. The show, “The Mandalorian,” was the one new series this year that it is possible to classify as a phenomenon.

It drove subscriptions to the new service, unleashed Baby Yoda merchandise just in time for Christmas, and spawned a slew of late-night monologue jokes, which is as good a sign as any that a TV show has made it.