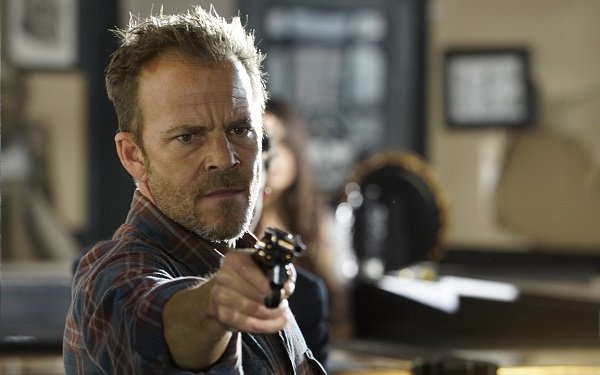 An air of unreality dogs “Deputy,” the first series premiere of the new year.

Making its debut Thursday night on Fox, “Deputy” is drama by exaggeration. Every action, every reaction, every gesture, every soliloquy (yes, the title character, sheriff of Los Angeles County, is given to speech-making) is played to the utmost, as if an imaginary emotion-meter had been turned up to 11.

You can start with the moment early in Thursday night’s premiere episode when this veteran deputy sheriff named Bill Hollister is suddenly elevated by happenstance to full sheriff, which means he now runs the entire department.

In the show, it is explained that the existing, long-time sheriff has had a sudden, fatal heart attack, and according to an old statute from the 19th century, Hollister is next in succession because he is the longest-serving deputy in the department.

But the scene in which Hollister is sworn in as sheriff is played as if this deputy sheriff was LBJ and President Kennedy had just died. So while Sheriff Hollister is out on a job, city officials in a fleet of black SUVs suddenly roll up at top speed, and then insist he take the oath right then and there, lest the sheriff's department go without a head man for an afternoon.

Meanwhile, while watching this spectacle the other day, I'm thinking: Couldn't all this have waited until he got back to the office?

Hollister is played with exhausting, pent-up energy by Stephen Dorff (picture above), who seems hellbent on having this character outrun, outwit and out-talk everyone with whom he comes in contact.

These include long-time colleagues -- both friend and foe -- his wife, his late partner's widow, the young plainclothes deputy who is assigned to drive him around, and a rogue's gallery of gangbangers.

Concerning that last group, an untold number of bad guys are fatally shot by Sheriff Hollister and his posse members in various raids and gun battles in just the premiere episode, with no suggestion of the tedious reports, interrogations and investigations that follow such incidents in the real world.

But this is not the real world. It is TV Land, where gun play is as common as crossing a street, and life is cheap.

For example, in the premiere of “Deputy,” Hollister and other officers are staking out the scene of a brazen robbery, but wait to confront the robbers until the crime is farther along in its execution.

This decision puts an unknowing private security man making his routine nighttime rounds in grave peril as he enters the building -- something he does in full view of Hollister and his deputies.

Lo and behold, this poor man is fatally shot by a robber wielding a shotgun -- a death that could have easily been prevented if Hollister and his associates had only intervened.

This collateral damage is never acknowledged, however, leaving a viewer to wonder if this security guard had a wife and family, since there is no evidence that this newly minted sheriff and his deputies ever considered it, even after they watched him get gunned down right before their eyes.

What is the role and jurisdiction of the L.A. County Sheriff's Department, when the city of Los Angeles has a large police force of its own -- the LAPD? This is never explained in the series premiere of “Deputy.”

I suppose I could look this up online, but that feels like homework. And I always thought homework was something you did before watching TV, not during it.

television
1 comment about "Fox's 'Deputy' Dogged By Exaggeration, Unreality".
Check to receive email when comments are posted.
Next story loading