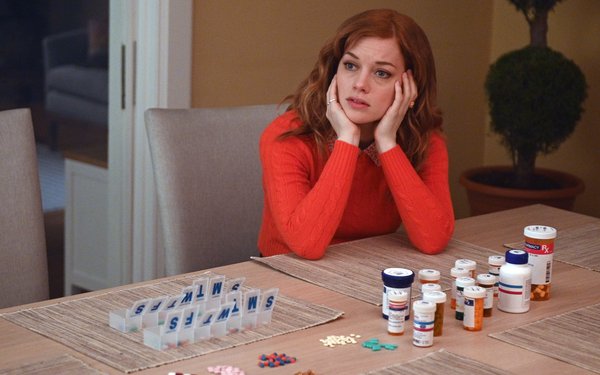 When the title character of “Zoey’s Extraordinary Playlist” is seen running down a San Francisco street being chased by a crowd of singing, dancing San Franciscans singing the Beatles’ song “Help!” you know you have crossed over into another dimension of sight and sound.

And like the proverbial Twilight Zone, it is also a place you will want to escape from fast. The scene -- and others like it in this new midseason series on NBC -- is reminiscent of similar scenes in the “Invasion of the Body Snatchers” movies (the second of which also took place in San Francisco), and any number of zombie movies and TV shows.

What exactly is the point of this new singing-zombie show on NBC? No answer presents itself except that it may exist simply to waste airtime, although that is not usually the purpose of a new TV show.

The show's characterization as a singing-zombie show is all mine. And let the record show that this is not really a zombie show; it just seemed like one to me.

NBC no doubt believes this musical, mind-reading hybrid is creative, unique, innovative, and something new and different. It might be all of those things, but it is also possible to regard this show as patently ridiculous.

In “Zoey's Extraordinary Playlist,” a young woman named Zoey develops the freakish ability to read the musical minds of people with whom she comes into contact, including friends, work colleagues and total strangers.

Specifically, what happens is this: While passing someone on a city sidewalk, she will pick up the audio of a popular song that might then be playing in the mind of another person. Sometimes that person will suddenly break into a performance of that song, complete with dancing.

He or she might also then be joined by others in the general vicinity and before you know it, the streets of San Francisco have turned into “A Chorus Line” (and probably not for the first time either).

It was in one of those scenes that Zoe was seen running away from a crowd of singer-dancers in what seemed like terror.

Zoey came by this ability in a freakish accident in an MRI scanner that suddenly went on the blink momentarily while she was inside of it undergoing a scan, and in the process, listening to some music.

This is reminiscent also of “The Fly” (both versions) and indeed any sci-fi picture of the last 75 years in which technology runs amok in ways its creators never contemplated.

However, this sci-fi heritage was not likely on the minds of this show's creators. They probably thought they were making an upbeat, fun, singing-and-dancing entertainment show that would be uplifting to all.

But it is not uplifting. Among other things, Zoey's father (Peter Gallagher) has undergone a series of debilitating strokes and her mother (Mary Steenburgen) is now her husband's full-time caregiver. This is a sad subplot.

In addition to this, Zoey learns through one of her music eavesdropping events that a co-worker's father recently committed suicide. This is also sad.

Clearly, “Zoey's Extraordinary Playlist” does not really know what it wants to be. Is it a lighthearted musical-comedy or a straight-up tragedy? It is both -- which does not work at all.

Truth be told, the show was a turn-off almost from the get-go when Zoey is awakened by the loud music that a thoughtless neighbor plays day and night in the apartment next-door.

This thoughtless neighbor, who in any real-life situation would be the jerk everyone who lives nearby dislikes, then suddenly morphs into one of this show’s key characters who is positioned as a mentor and confidante for Zoey on her mind-reading, musical eavesdropping journey.

As for the music in “Zoey's Extraordinary Playlist,” it is hardly extraordinary. Most (if not all) of it sounds like the K-Tel versions of the original hits. Note to younger people: This is a reference to very old commercials from decades ago for record albums of Top 40 hits that were famously not the versions recorded by the era's music stars. Instead, they were pale imitations.

Speaking of times past, once upon a time a show like “Zoey’s Extraordinary Playlist” would be universally panned and then remembered for years afterward as the kind of bizarre and ill-considered idea that only network television seems capable of.

“Zoey’s Extraordinary Playlist” premieres with a special “preview” episode on Tuesday (Jan. 7) at 10 p.m. Eastern. It then disappears until it assumes its regular time period -- Sunday nights at 9 Eastern on Feb. 16.