Like Howard Beale, Ricky Gervais Is Mad As Hell 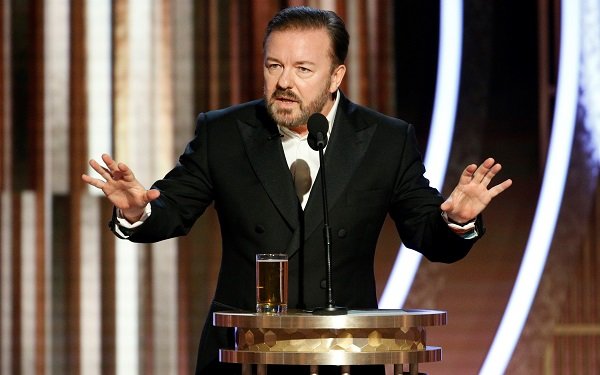 Peggy Noonan beat Ricky Gervais to the punch by one day.

“The past decade saw the rise of the woke progressives who dictate what words can be said and ideas held, thus poisoning and paralyzing American humor, drama, entertainment, culture and journalism,” she wrote in the column, which was styled as a look ahead to the new decade of the 2020s.

“In the coming 10 years,” she wrote, “someone will effectively stand up to them. They are the most hated people in America.”

Pretty strong words, and a strong opinion that is not really the kind of characterization -- “most hated” -- that can be supported with actual, quantifiable evidence.

However, her column -- and then Ricky Gervais' blistering takedown of Hollywood hypocrisy at the Golden Globes on NBC Sunday night -- both had a Howard Beale-ish quality to them. They were mad as hell and they were not going to take this anymore.

Their words -- and the media and methods by which they delivered them -- were certainly different. Noonan delivered hers in the context of a newspaper op-ed column. Her “most hated” characterization was purposely unadorned, serious and blunt.

Gervais (pictured above, hosting the awards on NBC) delivered his in the context of a televised comedy monologue. Certainly, he meant the monologue to be funny and to elicit laughter, which is the goal of any comedian.

However, one reason it drew so much attention in the aftermath was because through much of it, his audience of movie stars and entertainment-industry titans at the Golden Globes were not laughing. Or they laughed sporadically, and somewhat nervously, perhaps thinking of what their reactions would look like on TV.

His monologue almost certainly reached a much larger audience than Peggy Noonan's column, because of the relative differences between newspapers and network television -- even a newspaper of national renown and circulation such as the WSJ.

The estimated total audience for Sunday night's Golden Globes was 18.3 million, according to various reports. On YouTube alone, NBC's official video of Gervais's monologue posted late Sunday night had more than 7.75 million views as of 10:30 on Tuesday morning.

So what was so noteworthy about Gervais's monologue? In general, it was the usual thing we sometimes say about comedians, and also marvel at -- that they have this no-holds-barred way of saying things many of us think but do not say in social situations.

In the coverage of Gervais's remarks afterward, various comments were cited for the attention they drew or, in some cases, did not draw.

His remark about Felicity Huffman making the license plate on the limo he rode in to the awards seemed to hit home. So did his characterization of the movie called “Two Popes” as a pedophile movie.

His comments about an “In Memoriam” segment getting shelved because it was too white attracted attention too. “Maybe next year,” he added -- a throwaway line that did not get the attention it possibly should have.

His suggestion that some in the Golden Globe audience were “friends” of Jeffrey Epstein was among the comments that drew almost no discernible laughter.

His comments at the conclusion of the monologue (which ran to almost eight minutes in length) were perhaps his most pointed. They were an indictment of Hollywood hypocrisy.

He mentioned the Apple TV+ drama called “The Morning Show” -- about a fictional network wake-up show starring Jennifer Aniston and Reese Witherspoon -- and then said:

“A superb drama about the importance of dignity and doing the right thing, made by a company that runs sweat shops in China. [Just at this point, an NBC camera caught Apple CEO Tim Cook in the audience, frowning.] So, well, you say you won't, but the companies you work for, I mean, unbelievable, Apple, Amazon, Disney -- if ISIS started a streaming service, you would call your agent, wouldn't you?

“So if you do win an award tonight, don't use it as a platform to make a political speech,” Gervais said. “You are in no position to lecture the public about anything. You know nothing about the real world. Most of you spent less time in school than Greta Thunberg.

“So if you win, come up, accept your little award, thank your agent and your God and f--- off!”

One notable after-effect of Gervais's monologue was that it dominated the coverage of the awards to such an extent that many more people today are likely aware of it than can remember any of this year's Golden Globe winners announced on the very same evening.