Depressing 'Outsider' Is No Way To Start The New Year 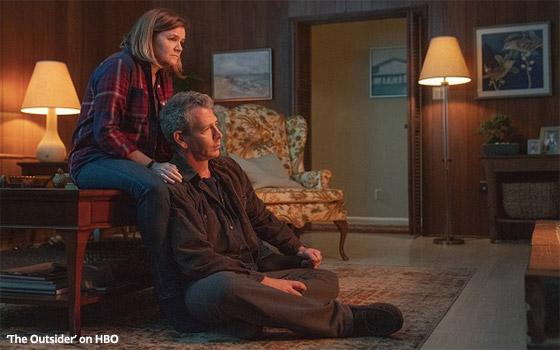 See the two people in the photo above? Don’t they look sad, depressed and listless?

A TV set is not seen in the photo, but it is not difficult to imagine them watching one located just outside the photo at right. That could explain their evident unhappiness.

They seem benumbed by what they might be watching -- possibly another show on TV’s lengthening roster of scripted dramas in which the depths of human depravity are explored again and again and again.

It might even be this new drama series premiering Sunday night on HBO -- “The Outsider” -- in which the badly mutilated corpse of a little boy is found in the woods and then ignites a search for a deranged killer who might have bitten off pieces of the boy while murdering him (or perhaps after murdering him).

The photo above (of Mare Winningham and Ben Mendelsohn) happens to be from that very show. He plays the lead police detective on this murder case and she plays his wife.

The murdered boy is someone else's son, but there are hints in the series premiere that they might have experienced a similar tragedy sometime in the past with their own son, who is deceased.

The question that arises more and more frequently -- every time another one of these sad, maudlin, tragic TV shows comes along -- is how to quantify these violent, unhappy shows in terms of their entertainment value.

Just using the word “entertainment” in that sentence feels awkward and inappropriate. Murder as entertainment? Well, yes, when one is talking about TV, where the death toll grows greater with each passing year. So too do the methods and means by which murders are committed.

The best thing I can say about “The Outsider” is that it does develop into a taut murder mystery that is so puzzling that it does manage to draw you in.

The series is adapted from a Stephen King novel, which indicates that much of what you will experience in this show’s murder story is not quite what it seems, at least at first.

However, the overall mood of the show is akin to attending a very long funeral. The first thought that occurred to me when beginning to watch the premiere episode the other day was: Oh, no, not this again.

And it's true, HBO's “Sharp Objects” -- the Amy Adams series from 2018 -- was kind of the same thing: A preteen girl is murdered in a small town, and another goes missing.

This is what we have come to: The murdering of children in small towns is now commonplace on TV, served up for our entertainment.

Oh, well, it is clear by now that this child-murder plot line is not the TV Blog's cup of tea. Perhaps this is due in part to the time of year. Aren't we supposed to feel more hopeful as the new year begins?

If so, we can almost always count on TV to dash those hopes before the ink dries on our New Year’s resolutions.