No 'Rhyme' Or Reason: 'Bone Collector' Is Bone-Headed 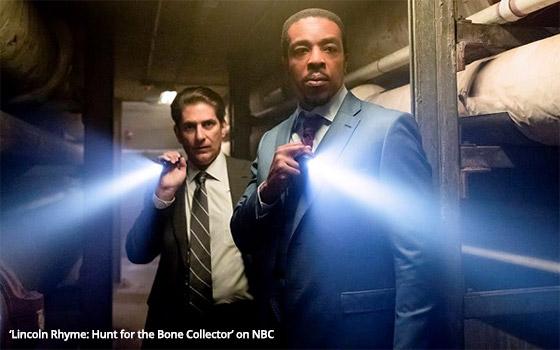 You can see them performing their feats of deductive genius on the new NBC series “Lincoln Rhyme: Hunt For the Bone Collector,” the longest title for a TV show since “On Becoming A God in Central Florida” premiered last summer on Showtime. (The titles are actually tied at seven words apiece.)

Let's get the exposition out of the way first. “Lincoln Rhyme: Hunt For the Bone Collector” is based on a novel and a movie. The novel was “The Bone Collector,” written by Jeffery Deaver and published in 1997.

The movie, released in 1999, was also named “The Bone Collector.” Denzel Washington played the New York City police detective Lincoln Rhyme (a character Deaver used in more than a dozen subsequent novels). Angelina Jolie played a uniformed rookie cop who teams up with Det. Rhyme to solve a series of killings.

In the new TV show with the much longer title, Russell Hornsby (above photo, right) plays Rhyme, and Arielle Kebbel plays the rookie cop named Amelia. Michael Imperioli (photo left) plays a police detective who was once partnered with Rhyme.

In the present day, Rhyme is a bedridden quadriplegic. In one of the first scenes in the premiere of “Lincoln Rhyme [etc.],” we learn that he became paralyzed 10 years previously in a booby trap laid by this serial killer nicknamed The Bone Collector. The scene above is a flashback.

As the show opens, a series of highly stylized murders in New York seem to be the work of The Bone Collector and Rhyme is invited to participate in the investigation.

Do they bag The Bone Collector in the premiere? Of course, they don't. Otherwise there would be no show. Apparently, Rhyme intends to play Ahab to this white whale for as long as the show lasts.

And that might not be long at all. Like another cop show that premiered earlier in the still-new year -- “Deputy” on Fox -- an air of unreality pervades “Lincoln Rhyme.” In fact, the derring-do on display here makes “Deputy” seem like a non-fiction documentary of police work.

The New York cops seen in “Lincoln Rhyme” bear no resemblance whatsoever to the men and women of the New York City Police Department.

In “Lincoln Rhyme,” everyone involved in this investigation possesses gifts of intellect, perception and reasoning that are far beyond the ken of real people or real cops. They are a type of superhuman seen only on TV, and mostly on CBS.

Rhyme himself has some sort of photographic memory that allows him to see schematics of the entire city of New York, both above and below ground, in his head. Within those schematics, he also can recall every building, if not every brick and rooftop water tank, that once stood on every spot or stands there today.

At the risk of overusing the word “ridiculous” in the reviews published here so far in the New Year, I have to go to it again to describe the eye-rolling nature of this show.

Talk about jumping to conclusions. On the basis of the flimsiest of clues, Rhyme and his cohorts conjure solutions to puzzling problems literally out of thin air, and always in the nick of time -- despite New York's famous traffic congestion, which seems to never be apparent in shows of this type.

It should go without saying, but the last thing TV needs is another serial-killer show. For one thing, serial killers are not exactly a big problem here in New York City.

This city presents many challenges for our police department, but serial killings are not one of them. They range from rare to nonexistent.

For some reason, during two scenes of death and torture in “Lincoln Rhyme,” the Buddy Holly song “Everyday” is heard playing in the background.

The source of this music is not seen or otherwise revealed. For that matter, there is no rhyme or reason for it to be playing either. The same might be said for this show too.