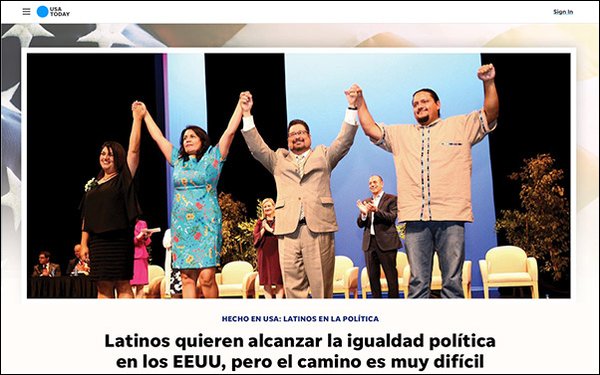 USA Today has launched a Spanish-Language vertical focused on stories and issues important to the Latino community called “Hecho en USA,” or “Made in America.”

The effort is led by USA Today national enterprise editor Christina Silva, who is working with a team of reporters and a translator.

The stories on “Hencho en USA” appear in both Spanish and English. The first series of stories, which posted yesterday, include reports on bilingual education, college education and Latinos in politics.

Silva stated: “This series is launching in a year when Latinos are poised to become the second-largest minority bloc in the country, and we hope it encourage discussions about issues that are of importance to them.”

Prior to the launch of “Hecho en USA,” the USA Today network published stories and investigative projects in both Spanish and English, including a story about pollution along the U.S.-Mexico border and a project about migrants.