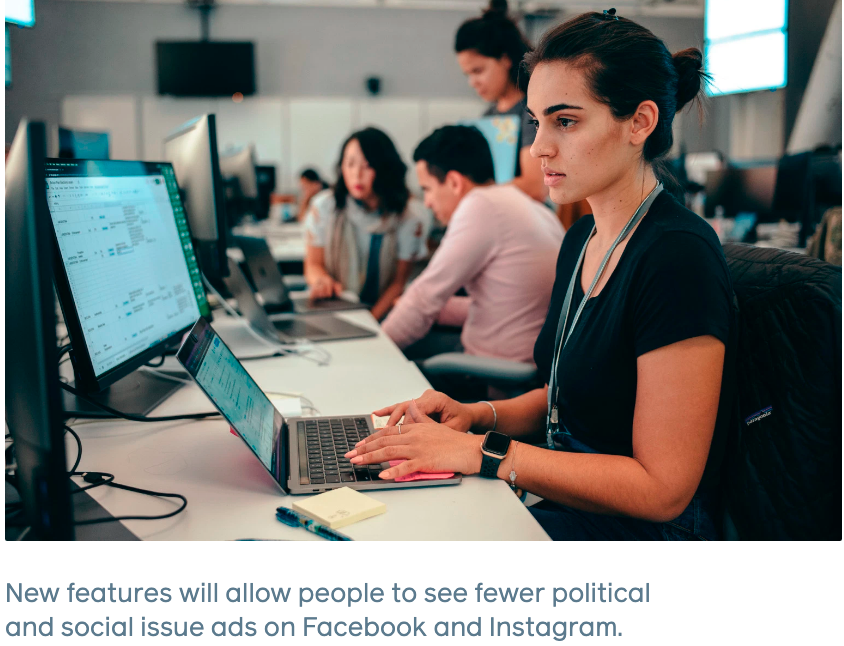 Facebook is sticking with its controversial policy of refusing to fact-check political ads or ban false ones, and has also decided not to limit microtargeting by political campaigns, the company announced in a blog post this morning.

Instead, according to the post by Product Management Director Rob Leathern, Facebook plans to “add a new control that will allow people to see fewer political and social issue ads on Facebook and Instagram. This feature builds on other controls in Ad Preferences we’ve released in the past, like allowing people to see fewer ads about certain topics or remove interests.”

The post doesn’t specify what seeing “fewer” ads means, or promise that users can block all political ads.

The political ads control will be deployed in the U.S. “early this summer” (just a few months before the 2020 elections) and expanded to other locations over time, the post says.

Leathern also lays out new Facebook Ad Library tools that it says will make it easier to search for and browse political ads. The library also will now include audience size estimates for such ads.

He devotes a few paragraphs to reiterating/explaining Facebook’s political ad policies, and confirms that, as had been widely reported, the company did consider limiting microtargeting.

“Unlike Google, we have chosen not to limit targeting of these ads. We considered doing so, but through extensive outreach and consultations we heard about the importance of these tools for reaching key audiences from a wide range of NGOs, nonprofits, political groups and campaigns, including both Republican and Democrat committees in the US. And when it comes to targeting, our data actually indicates over 85% of spend by U.S. presidential candidates on Facebook is for ad campaigns targeted to audiences estimated to be greater than 250,000.

Ultimately, we don’t think decisions about political ads should be made by private companies, which is why we are arguing for regulation that would apply across the industry. The Honest Ads Act is a good example — legislation that we endorse and many parts of which we’ve already implemented — and we are engaging with policy makers in the European Union and elsewhere to press the case for regulation too. Frankly, we believe the sooner Facebook and other companies are subject to democratically accountable rules on this the better.”