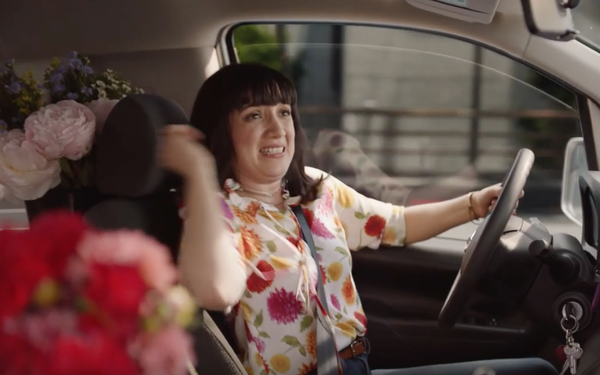 The easily recognizable, 10-year-old Farmers Insurance jingle is the star of a new campaign for the insurance brand.

By integrating the jingle early on in the ads, along with the layering of suspense, humor, and brand awareness, viewers are provided with fresh sound-on environments and placements, such as digital preroll and mid-roll, as well as in-stream on Facebook and Instagram, says Leesa Eichberger, head of brand marketing at Farmers Insurance.

“The team at Farmers Insuranceand RPA worked with YouTube to uncover some insights about how people were viewing their online video advertising with the goal of better designing content for the platform,” Eichberger tells Marketing Daily.

Farmers' data indicates a spike in viewers’ attention upon hearing the Farmers' jingle.

“The theory to explain this observation was that people were not only familiar with the jingle, but had come to associate it with funny and unexpected events,” Eichberger says. “Based on the findings, the RPA creative team came up with the idea for the jingle to play earlier on in the ‘I’m in a Farmers commercial’ ad in order to signal to viewers, and the characters in the spot, that something humorous and seemingly unbelievable was about to happen.”

In “Saved By The Bolt,” a teenager gets out of lawn duty when lightning strikes the lawn mower parked outside his living room window. “Swat and Serve” features a hapless flower company delivery driver who loses control of the vehicle thanks to a bee, who has hitched a ride inside the vehicle. In “Denting Range,” a golf swing gone awry results in a giant dent in a car hood. Finally, “Rock and Wreck” shows a driver so engaged in air drumming, he drives right into an AC unit.

“Saved by the Bolt” went live Jan. 6 and “Denting Range” will go live the week of Jan. 20 in support of the Farmers Insurance Open. “Swat and Swerve” is set to debut in April. “Rock and Wreck” went live in August 2019 in an online video buy. All spots are running as YouTube preroll.