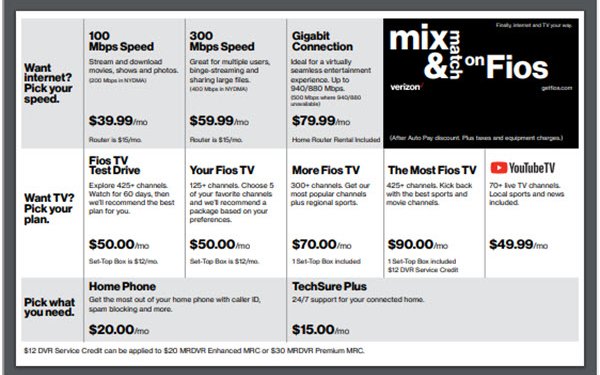 Verizon is taking on cord cutting — and competitors — by replacing large, traditional bundles with a system that gives  subscribers considerably more latitude to “mix and match” TV, internet and phone plans to reflect their usage and preferences.

Mix & Match on Fios customers select from three internet speeds and several relatively small, relatively inexpensive and more customized TV bundles, at preset rates. There are no contracts, so subscribers can change their options as often as every month.

“Customers have been loud and clear about their frustrations with cable, and we’ve listened,” stated Frank Boulben, Verizon senior vice president of consumer marketing and products, in announcing the move. “As a result, we’re transforming our approach to Internet and TV offers by giving customers more choices and more transparency. Customers are tired of having to buy a bundle with services they don’t want to get the best rates, and then discover that those rates didn’t include extra fees and surcharges. We’re putting an end to the traditional bundle contract and putting customers in control.”

Then they pick a video plan, at an added cost per month. All options include access to local broadcast stations.

One option is streaming their content through YouTube, rather than a cable connection. That delivers 70-plus live TV channels at $49.99 per month. (These customers can opt to pay for YouTube TV as part of their Verizon bills.)

They can opt for a 60-day “test drive” all of Fios TV’s 425 channels for $50 per month, after which Fios will recommend a video package based on their specific usage patterns.

Home phone is offered for $20 a month. Tech support for the system is $15 a month.

“We really believe we are breaking the code of the cable industry with this new portfolio of offers,” Boulben told Broadcasting + Cable. The system lets consumers understand true costs by eliminating discounts for packages of multiple services, and fees for broadcast channels and regional sports networks, he said.

(While Verizon is also touting that all plan prices include all fees and surcharges, this claim seems a bit disingenuous, given that new federal law will soon make it mandatory for all TV providers to include all fees in prices.)

Verizon isn’t yet revealing whether it will offer content delivery through other streaming services or vMVPDs.

Sanford C. Bernstein analyst Peter Supino observed that Verizon appears to be looking to “retain video subs without conceding margin, while putting its internet marketing on the best possible footing with the full spectrum of customers.”

“With ‘custom’ video bundles, the marginal video customer gets what he/she wants (to not buy things that they won't watch), while Verizon optimizes its per subscriber video costs. This additional margin opportunity funds Verizon's elimination of video's infamous add-on service fees (but not set-top box rentals charges),” Supino said in B+C.

Verizon is obviously betting that its initiative will revive Fios, which has lost cable subscribers in every quarter since 2016. Having lost nearly a quarter of a million in the last four periods, its cable subscribers totaled 4.2 million as of September.

Meanwhile, however, its internet subscribers have been seeing steady growth, and now total 5.9 million.

The reason? Verizon consumer group head Ronan Dunne this week told investors that “allowing customers to mix and match wireless unlimited plans had generated incremental revenue, as some subscribers opt to buy more costly streaming quality, hot-spot usage and amounts of data,” reports The Wall Street Journal. “He said the company had the same opportunity within its traditional home internet and video business.”

“Fees are really a customer irritant. And that’s why the satisfaction levels of the cable industry are as low as they are,” he told B+C.