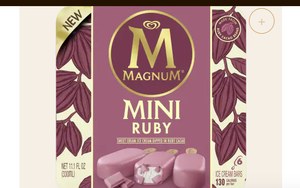 What happens in Turkey can happen in the United States—at least when it comes to ice cream.

That’s one of the guiding principles behind Unilever’s launch this month of Magnum Ruby Minis, the first national ice cream brand to feature the pink, berry-flavored chocolate variant called Ruby. Since its discovery in 2017, Ruby is considered the world’s fourth official iteration of chocolate (alongside white, dark and milk).

According to the 2019 Diet Trends Survey from Innova Market Insights, of the 56% of Americans who said that they changed their eating and diet habits over the past year, 60% wanted a “healthier alternative” when it comes to treats.

“There is a chance that Magnum Ruby Minis may win if perceived to be the ‘healthier alternative’ by virtue of the novel Ruby chocolate ingredient, as well as the portion control offered by the minis format,” says Innova’s vice president of strategic insights for North America, Tom Vierhile.

“The berry flavor profile of the Ruby product may persuade some consumers that this variant may be just a little bit more healthful than regular chocolate. This perception could be a tiebreaker when consumers are facing a freezer case full of competing products and are looking for something that will scratch the indulgence itch while tamping down guilt.”

Leslie Miller, Unilever’s director of marketing for ice cream in North America, has spent nearly a decade tending to the CPG giant’s cold and sweet brands. In this interview with CPG FYI, she explains the origin of Magnum Ruby and talks about trends in premium ice cream.

CPG FYI: How can consumer tastes in a country like Turkey be a precursor of trends in the United States?

Leslie Miller: Fun fact: Turkey is one of the largest ice cream consumption markets in the world, and Magnum is very well known. We launched in Turkey in 2019 and it was such a smash success, we were very excited to get the opportunity to bring it to the U.S. consumer. We love to test ideas with highly loyal consumers, so for us Turkey really does shine as an opportunity to highlight a trend.

CPG FYI: What are some of the more noteworthy developments in premium ice cream?

Miller: One of the three big things we’re seeing right now is buzzworthy collaborations. Whether it be with media partners or franchised properties, or a partnership in licensing. For example, we have a great relationship with Hersey, so bringing two strong brands together in a collaboration.

Second, we’re always looking for new flavors. I always think back to 2007 and 2008, when sea salt caramel was just starting to populate into New York bakeries and chocolate shops. That became a movement that started with a niche trend.

Last but not least, we’re always conscious of trends in dieting. We want to make sure that if our consumers are facing dietary concerns or health issues, that we have solutions for them that feel indulgent and special.

CPG FYI:Who is the target audience for Magnum ice cream?

Miller: We love to talk to people who love chocolate. Whether it’s a young millennial, or a mom who had a really tough day at work and is looking for a little moment on the couch with a great piece of chocolate. Or a grandparent who is retired and is enjoying moments with their grandchildren or children.

Miller: You might note that the pink product pairs very nicely with Valentine’s Day. So we have some great promotions and consumer engagement coming in about a month.

CPG FYI:In Japan, Ruby chocolate is a huge hit, available in at least 100 different products. Will Unilever go beyond Magnum and introduce it to some of its other brands in the United States?

Miller: We want to make sure that it really works with a brand’s DNA. Right now, Magnum has a very strong connection with chocolate, so it feels right. I think as we see how it does and how it really elevates the brand’s chocolate credentials, we’ll understand whether that can work in other brands.