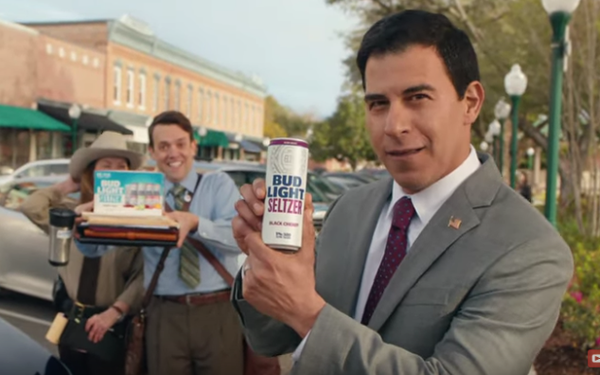 It would have been impossible to predict a decade ago that in the first days of 2020, Anheuser-Busch In Bev would be introducing not its first, but its third spiked seltzer product. It would be harder still to suppose the company would be launching this product with a blitz of ads in beer-centric  NFL playoff games.

As they say in pro football, on any given Sunday the most unpredictable things can happen.

Bud Light is launching a campaign for its new Bud Light Seltzer during NFL playoff games this weekend with three ads (one in Spanish).

That’s the TV  territory that had been previously occupied by a knight in armor whose loyal subjects like to say “Dilly, dilly,” and drink low-alcohol beer -- and sometimes make fun of drinkers who prefer prissier stuff.

The seltzer, which at least compares to prissier stuff in the minds of many premium beer drinkers,  is due to be officially launched Jan. 13.

The ads, from the Wieden + Kennedy agency, are centered on the impact of Bud Light Seltzer on the small town of Seltzer, Pennsylvania. The story is totally fictional, but the actual town is real. Seltzer (population 307, as of the 2000 census) is  located in the southern central part of the state.

During that segment, the female sheriff, writing a traffic ticket, puts herself in the don’t-like-Bud Light camp. “I’m a vodka gal myself,” she says, which plays to another of Bud Light Seltzer's likely attractions: Drinkers often use hard seltzers as mixers.

UBS analysts suppose about $1 billion in hard seltzer was sold last year and that sales may top $2 billion in 2020.  The Budweiser brand isn’t on top of the heap. Its Bon & Viv is a distant third to White Claw and Truly. The new Natural Light Hard Seltzer from Anheuser-Busch is just getting going. All are aimed at the drinker who increasingly is not drinking beer.

But Bud Light Seltzer carries the name of the best-selling Budweiser, so it’s a campaign that will be interesting to see unfold, as the brand deftly promotes itself without trashing the beverage that’s been its claim to fame for nearly 150 years.

Little Seltzer is an eight-minute car ride from Pottsville.That’s the hometown for Yuengling beer, which claims to be the oldest operating operating brewery in the nation, founded in 1829, and still operated by the founding family. Budweiser was founded in 1876.