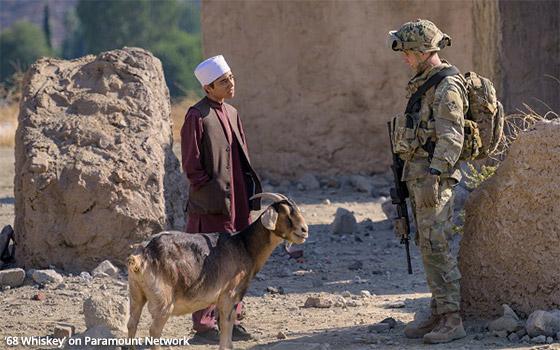 A new scripted series about American servicemen and servicewomen residing at a fictional, forward operations base (FOB) in Afghanistan is insulting to U.S. military personnel and Afghans alike.

One might even take that sentence a step further by declaring that this show, titled “68 Whiskey” and premiering Wednesday night on Paramount Network, is also insulting to its intended audience, although I suppose that is a matter of personal taste.

In the publicity materials for “68 Whiskey,” the show is being promoted as a production of executive producers Ron Howard and his spiky-haired production partner Brian Grazer. The show is far from this producing duo's finest hour. In fact, it might be their least-finest hour.

Let's start with the very first line of dialogue in the premiere episode. Are you ready? Here it is, as uttered by a female soldier as she is engaged in -- ahem -- an amorous moment with a male soldier positioned closely behind her: “I love the way you [expletive] me!”

Yes, this is the way the show opens -- with a lengthy, graphic sex scene featuring an elaborate orgasm and an f-word. On the version of the episode provided for preview, the f-word was not bleeped or otherwise censored.

Later in the episode, in another sex scene featuring these same two characters, the woman describes another man's genitalia in terms generally not heard outside of pornography.

And there is a third graphic sex scene in this one-hour episode (actually just 45-plus minutes of running time) in which a woman doctor is coitally involved with an Afghan villager who has just recently been a patient at the base hospital.

This scene manages to be both implausible and insulting all at the same time. It is implausible because this Afghan man has just recently undergone emergency surgery to remove more than 40 shards of shrapnel from his chest.

And yet here he is, seemingly just hours or possibly a single day after this major surgery, exhibiting the energy of a stallion in an army cot with his surgeon.

The scene is insulting because of its assumption that this Afghan man, who in all likelihood would be a devout Muslim, would succumb immediately to this American woman doctor's desire to sleep with him. Casual sex of this type is purely a Western construct -- at least in our TV shows and movies.

In other scenes, the local Afghans are portrayed as violent and volatile hashish merchants who are incapable of normal tones of speech. Instead, they speak only in harsh, guttural, angry tones -- their native language positioned as little more than incomprehensible gibberish.

The stereotypes of U.S. military personnel are no better. On this forward base, everyone has a scheme -- betting on a boxing match, stealing medical supplies to sell to the natives or, in the case of the randy soldiers getting it on in the supply tent, cheating on spouses and significant others.

So, what is “68 Whiskey”? After the premiere episode of this show was over, I realized I had no idea what this title meant. So, once again, I had to turn to Google to learn a basic fact about a TV show. In this case, “68 Whiskey” is slang for “68W,” which refers to forward military bases whose principal function is medical.

Having learned this, no one should tune in to “68 Whiskey” expecting to find the Afghan War version of “M*A*S*H.” Sour mash is more like it.

television
1 comment about "'Whiskey' A No-No: Paramount Afghan War Drama Is Insulting".
Check to receive email when comments are posted.
Next story loading