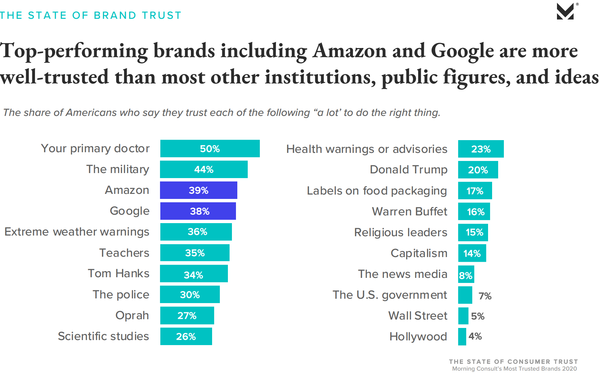 Americans don’t have much trust in institutions and brands, they say in a new report from Morning Consult’s Brand Intelligence that shows  a deep level of wariness at all levels.

Two-thirds of respondents themselves recognize that Americans have become less trusting in recent years.

The people, corporations and institutions they trust the most start with the United States Postal Service (43%) Amazon (38.8%) and Google (37.9%), followed by PayPal, The Weather Channel, Chick-fil-A, Hershey, UPS, Cheerios and M&Ms.

That’s the relatively bright side.

“Distrust is particularly potent when concerning institutions and concentrations of power,” a report summary says. “Less than one in 10 Americans have a lot of trust in the U.S. government. Just 4%t put a lot of trust in either Wall Street or Hollywood. Religious leaders, major industries, the public education system, and other important foundations of society are also met with varying degrees of skepticism.”

But overall , younger consumers seem more distrustful too. For Gen Z, the average brand trust rating was +10, compared to +21 for boomers.

Facebook doesn’t show up among the most trusted among any of the demographic groups.

Tom Hanks (34%) and Oprah Winfrey (27%), in this survey, have comparatively large trust factors.

Asked to name the  companies, institutions or people that consumers trust to do the right thing  “a lot," respondents first picked their  “primary doctor,” at 50%. The military comes next at 44% and then Amazon (39%) and Google (38%).

Morning Consult does daily tracking of consumers through its proprietary platform, Brand Intelligence, that follows over 2,000 companies.

The Most Trusted Brands rankings were determined using surveys conducted online among a national sample of adults. The surveys were conducted from mid-October through early December, with an average of 16,700 interviews per brand for nearly 2,000 brands. All other data ws drawn from a survey conducted in mid-December with a nationally representative sample of 2,200 U.S. adults.