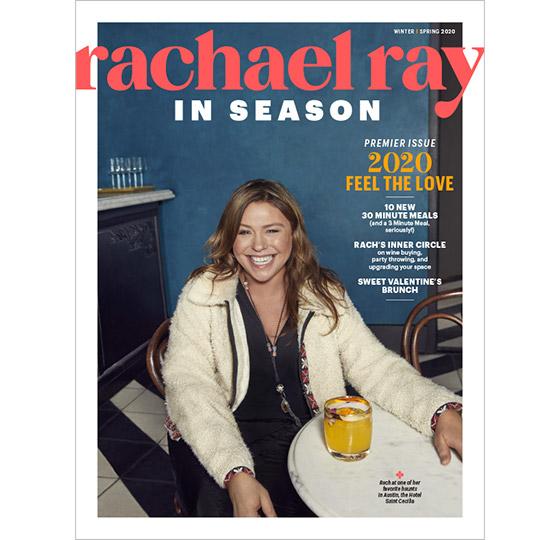 Meredith Corp., which publishes Rachael Ray In Season, announced last fall that Rachael Ray Every Day would drop from its 10-time-a-year frequency to the quarterly model.

“This new format delivers richer, more seasonal, more of-the-moment content that’s personal in every way. It’s designed to be more of a keepsake and a collector’s item,” stated Ray.

New advertisers in the inaugural issue include Kraft, Perdue and Wonderful Pistachios, among others.

EIC Lauren Iannotti stated: “Our readers told us they’re not looking to try 100 new recipes every month. In Rachael Ray In Season, we’re boiling it down to the true must-makes and giving our readers an experience they’ll want to stretch out and spend time with, rather than race through. We’ll have even more Rachael throughout the magazine, and a fresh, immersive feel.”

Rachael Ray In Season is the latest in a string of premium quarterly lifestyle magazines to come from Meredith.

Coastal Living and Cooking Light adopted this model over the past year or so, then each introduced a subscription model in late 2019. Last week, Drew and Jonathan Scott launched their new lifestyle quarterly Reveal with the publisher.

“We’re bullish about the quarterly subscription/newsstand model,” Doug Olson, president of Meredith Magazines, told Publishers Daily, around Reveal’s launch. “Producing high-quality content in a premium package is what our customers want and they’re willing to pay for it. This is a solid business for Meredith.”

Rachael Ray In Season is not yet available via subscription, but can be purchased online and on newsstands for $9.99 an issue.