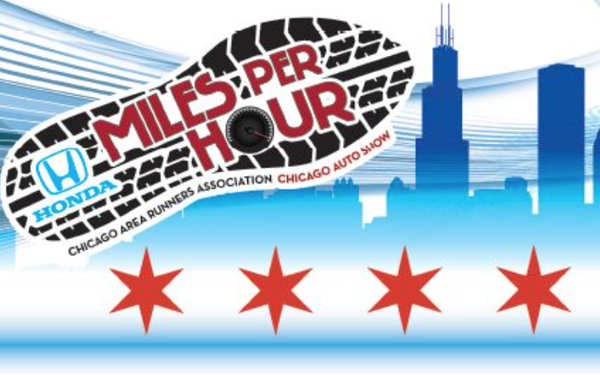 A new activity at the Chicago Auto Show, an indoor run around the show floor, is an example of how auto shows are trying new strategies to attract attendees.

Chicago Auto Show organizers have partnered with the Chicago Area Runners Association to host Honda Miles Per Hour, an indoor run that guides participants on a 2.4-mile loop through the auto show. The event’s moniker accurately describes the premise of the run, where participants will cover as much distance as possible in one hour.

“This is a great opportunity for us to tap into a new audience,” said Chicago Auto Show General Manager David Sloan in a release.

The logo for the inaugural event, which Honda has signed on as a one-year sponsor,  features the sole of a running shoe with Honda’s logo in the tread. The post-race event will be held at the Honda auto show display where participants can grab their goodie bags and snap a photo in front of a Honda-branded step and repeat banner. Winners will also be awarded medals at the Honda display.

The sponsorship by Honda’s Chicago Dealer Association is a natural fit for the automaker, since Honda owners in the Chicago area over-index in running, according to a spokesperson.

Honda sponsors a number of other sporting events including the National Hockey League, Little League Baseball and Softball, Esports — Team Liquid and League of Legends Championship, and the Honda Classic PGA Golf tournament.

The Chicago run is scheduled for Feb. 16, the final Sunday of the show. Runners will complete loops through the large halls of McCormick Place, where they can experience the Chicago Auto Show before the masses arrive for one of the show’s busiest days.

“This is truly a unique and comfortable way to race indoors, especially with the entertainment of the auto show displays to keep runners engaged,” said Greg Hipp, Chicago Area Runners Association executive director.