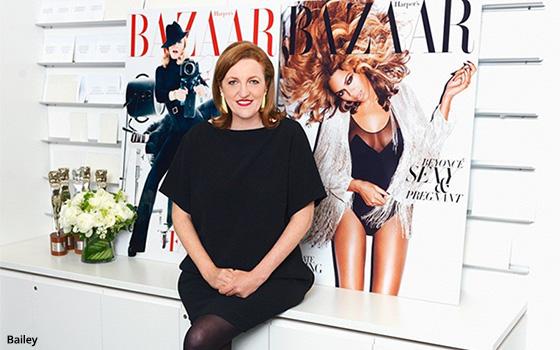 Dame Glenda Bailey is stepping down as editor-in-chief of Harper’s Bazaar, after nearly 19 years in the role.

In March, Bailey will become a global consultant at Harper’s Bazaar, serving as Hearst’s liaison with the brand’s 29 global editions.

She will work with both editorial teams and luxury, fashion and beauty marketers to develop partnerships and portfolios, according to the publisher.

She will help identify her successor, “who will be named shortly,” according to Hearst.

“Glenda’s mark on the Bazaar brand is indelible and her contributions immeasurable,” stated Hearst Magazines president Troy Young. “She’s passionate about fashion as both entertainment and high art, and we’re happy to be able to access her creativity and imagination for our global editions.”

She served as editor-in-chief of the Marie Claire brand, as well as editor of the U.S. edition, prior to joining Bazaar.

Bailey will oversee the opening of a new exhibit at the Louvre’s Musée des Arts Décoratifs, “Harper’s Bazaar: First in Fashion," in Paris on February 28.

“Fashion and beauty are my career and my hobby — there’s nothing that inspires me more," she stated. "With the exhibition opening during Paris Fashion Week, the timing is perfect for a new adventure. I’m looking forward to working with brands to find creative solutions and with our global editors to learn about their audiences and devise ways to surprise and delight them."

Bailey received an O.B.E. (Order of the British Empire) from Queen Elizabeth II in 2008, in recognition of her services to British journalism and fashion in the United States.

In 2012, the French government honored her with the award of Chevalier of the Ordre des Arts et des Lettres.

*This article has been updated. An early version incorrectly listed Glenda Bailey as the founder of Marie Claire.