Where In The World Is Rob Lowe? In Texas Playing A Firefighter 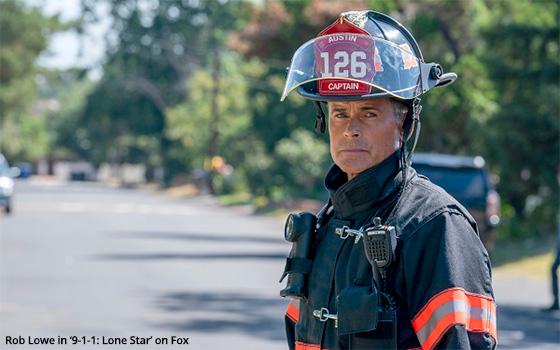 This time, he's a rough, tough veteran captain in the New York City Fire Department with 9/11 battle scars -- not actual scars, but emotional ones.

You can tell he has no physical scars because he shows off his buff, 55-year-old upper bod in the premiere episode of his new Fox drama series, coincidentally titled “9-1-1.” Subtitled “Lone Star,” the show premieres Sunday night.

The subtitle is intended to distinguish this show from the other “9-1-1” on Fox that takes place in Los Angeles but carries no subtitle.

Yes, prime-time TV fans, it is time to bear witness to the expansion of another stand-alone prime-time drama into a “franchise” in which essentially the same show will take up residence somewhere else.

Specifically, “9-1-1: Lone Star” takes place in the Texas capitol of Austin. This is where the Lowe character -- Capt. Strand -- decides to move after receiving a job offer to rebuild and revive an Austin fire station that lost all of its personnel (except one) in the tragic explosion and fire of a Texas factory that processed manure into fertilizer.

The reasons he moves there are complicated, but they concern a medical issue (his) and a drug and alcohol addiction (his son's.) His son is an FDNY firefighter who just happens to be gay. He takes up residence in Austin too, working under his father.

Indeed, “9-1-1: Lone Star” is nothing if not diverse. As Capt. Strand goes about the task of re-staffing the Austin fire station, he casts a wide net. In no particular order, he hires a Muslim woman, an Indian-American man and a trans man who is also African-American.

And Capt. Strand himself is a bit of a metrosexual. In the aforementioned scene in which he strolls around the common space of the firehouse bathroom and shower facility with only a towel wrapped around his midsection, he gives several of his charges a tutorial on skin products. Let the record show that Rob Lowe's skin, at least from the waist up, looks terrific.

The reason an Austin fire department administrator took the trouble to look up Capt. Strand and invite him to Austin in the first place is because of the FDNY captain's 9/11 backstory.

In the show, it is explained that Capt. Strand was the only member of his New York City firehouse to survive the attacks on the World Trade Center. How this came to be is not explained in the premiere episode of “9-1-1: Lone Star.”

But his experience makes him somewhat uniquely qualified to reconstitute the Austin firehouse because this is what he was assigned to do at his own firehouse in New York.

And that's the show. Throw in some unusual emergencies and a possible love interest for Capt. Strand -- an EMS captain played by Liv Tyler, 42 (13 years younger than Rob Lowe) -- and a new fire-and-rescue TV drama is born.

There is nothing particularly wrong with “9-1-1: Lone Star” other than the fact that it is, by its nature, a far-from real-life portrayal of Austin's (or any other city's) fire department.

Plus, some might contend that using the very real-life tragedy of 9/11 as the basis for another firefighter drama on TV is not appropriate. Is it too soon, as the comedians sometimes ask of jokes about tragic events? It is a question for which the TV Blog has no answer.