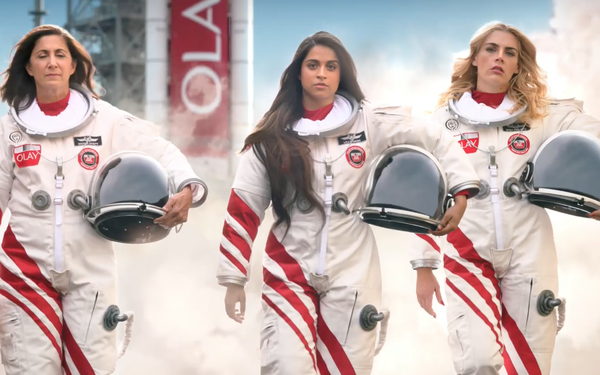 Looks like Procter & Gamble’s Olay will be going full-on feminist for this year’s Super Bowl. Teasers for the spot have Katie Couric playing the news anchor announcing the fictional space launch, with Taraji P. Henson starring as mission controller to comedian Lilly Singh and actress Busy Philipps. Real-life astronaut Nicole Stott goes along for the ride, too.

The company is one of the earliest out of the gate, posting two teaser spots. And that’s a smart move, says Tim Calkins, a clinical professor of marketing at the Kellogg School at Northwestern University. “It’s an appealing message, and a safe one,” he says. “By seizing the moment, it’s likely to get more notice.”

Nor does he expect many brands to court controversy this year, especially with both President Donald Trump and candidate Michael Bloomberg airing ads.

The ad, from Badger & Winters, is funny. But P&G is also hitching the space launch to a serious cause. The company says it intends to donate $1 to Girls Who Code every time someone uses its #MakeSpaceForWomen hashtag.

That group is committed to closing the gender gap in technology, making it easier for girls to become scientists, engineers, programmers and space explorers, a cause few would find controversial.

“It’s not enough to have a great cause,” Calkins tells Marketing Daily. “You have to a great way to showcase it.”

In recent years, Olay has pivoted to female empowerment messages, including its 2018 “Face Anything” effort, which also starred Singh.

And the brand got plenty of buzz last year for its Super Bowl debut, with scream queen Sarah Michelle Gellar in the horror-themed “Killer Skin” ad.