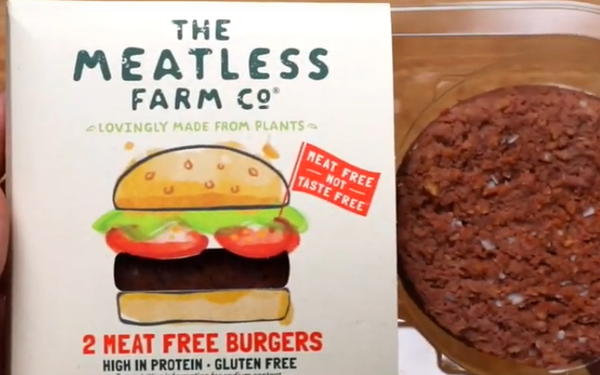 When Britain’s The Meatless Farm Co. decided to enter the fracas that is the U.S. plant-based foods space last summer, the focus was on being “meatless.”

Its first advertising campaign—mainly consisting of social media and outdoor—emphasizes taste, in an attempt to influence people who might be considering reducing their meat intake.

Knowing that taste is one of the main hurdles in getting people to sample plant-based meat alternatives, Meatless Farm’s billboards pose the statement “Making a difference without tasting the difference.” The only nod to environmental, meat-related concerns is the notation “Made lovingly from plants.”

In between those messages is a subtle reference to competitors Beyond Meat and Impossible Foods: “Beyond the impossible!”

“It was important for us to have a clear message for our first big outdoor campaign,” Kasper Vesth, Meatless Farm’s general manager for North America, tells Marketing Daily.

In a paid partnership with the food website Twisted, this Meatless Farm video shows how to make crispy hash browns with sweet potatoes, a side dish for a Meatless burger.

The campaign by Deloitte:Isaac, with public relations support by Channel V Media, is based in part on research from Dynata showing that 56% of U.S. survey respondents between ages 18 and 65 are either “very likely” or “somewhat likely” to eat one meat-free meal each week in 2020.

“Only about 12% of those say it’s for environmental reasons, while 75% say it’s for personal health reasons,” says Vesth.

Nonetheless, Meatless Farm has teed up a number of initiatives to highlight the environmental benefits of doing without one red-meat meal per week—including a “meatless consumption calculator” on the company’s website.

Unlike some U.S. companies that brought plant-based alternatives to quick-serve restaurants before going retail, Meatless Farm is doing the opposite.

“We thought it made sense for us to do it like that. That said, food service is definitely on our radar, and we’re hiring people in those positions right now,” Vesth adds.

The company will be publicizing events at local restaurants that carry its products, beginning with Pomodoro Rosso in Manhattan.

Vesth acknowledges the ongoing political and verbal warfare between meat producers and suppliers of meat alternatives, but suggests Meatless Farm would like to avoid it all.

“For us, it’s all about being very honest about who we are. When people see our products in the supermarket, there’s no doubt this is not meat. All of our products are called meat-free. It’s not something I’m super worried about, to be honest.”

In its upcoming study on the future of food, GlobalWebIndex asked U.S. and U.K internet users ages 16-64 their reasons for having a meat-free diet. No. 1 (45% of respondents) cited animal welfare concerns, followed by meat production’s impact on the environment (37%) and not perceiving meat as healthy (32%).