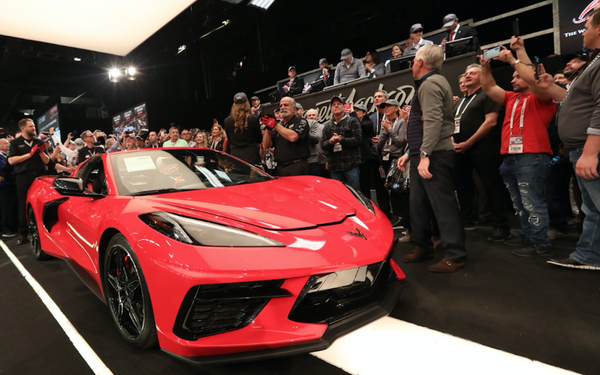 General Motors donated the first 2020 Chevrolet Corvette Stingray off the assembly line to auction, resulting in a $3 million donation to the nonprofit Detroit Children’s Fund.

The VIN No. 0001 of the first mid-engine Corvette crossed the block at the 49th Annual Barrett-Jackson Scottsdale Auction just weeks before the Corvette begins shipping to Chevrolet dealers.

The winning bid was placed by Rick Hendrick, the current owner of NASCAR team Hendrick Motorsports and founder of the Hendrick Automotive Group.

“I am the number one Corvette junkie in the world,” said Hendrick in a release.

Corvette coupe production will begin at GM’s Bowling Green Assembly Plant in Kentucky in early February, with customer deliveries slated to begin before the end of February.

Previous vehicles to go for top dollar at auction include the first production Toyota Supra ($2.1 million) and the Ford Mustang Shelby GT500 ($1 million), whose proceeds also went to charity.