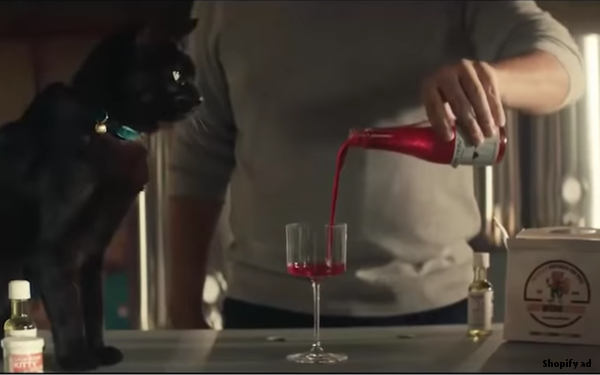 Whether they’re selling pet wine or custom wigs, Shopify knows that the million or so businesses that rely on its platform are a widely varied crowd. So in its new ad campaign -- and its first national effort -- it’s highlighting as many of those companies as possible, trying to get closer to what CMO Jeff Weiser calls “the heart center of the brand.”

It’s also much closer to the center of the D2C universe. Themed “Supporting independents,” it conveys the merchant-obsessed values of the company, Weiser says.

And while many people talk about D2C as a trend, he says Shopify prefers to think of it “as a steady state of business for centuries. It wasn’t until the rise of the department store that it got interrupted. We think D2C has been the past and will be the future.”

He tells D2C FYI that Shopify's first campaign, called “Let’s make you a business,” focus on increasing familiarity with the brand.

The ads, from agency R/GA, highlight more than 330 businesses on Shopify, using some 2,000 of their products. The idea is to show off Shopify as an ally of independent business owners, with its mission linked to the success of its members.

“We thought, 'We work with them all day, every day. Why not feature them in our ads?’”

In addition to the TV, digital, out-of-home and social placement, he says the companies included in the campaign are also building buzz with their own social media channels, highlighting their excitement about being included in the ads.

Even things invisible to viewers of the ads -- hair-styling products, for instance -- have been sourced from Shopify customers.

The company continues to add to its muscle in powering ecommerce. In its most recent quarterly results, revenue for the tech company (based in Ottawa) rose 45%, to $390.6 million. Subscription solutions revenue climbed 37% to $165.6 million, while sales in its merchant solutions group gained 50%, to $22 million.

But losses also increased, with an operating loss of $35.7 million, compared with a loss of $31.4 million in the comparable period of the prior year.