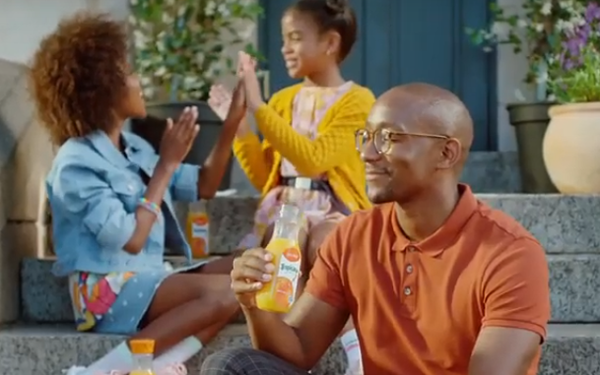 Tropicana’s first new brand campaign since 2017 targets “vibrant families” by encouraging them to celebrate small moments of brightness throughout their everyday lives.

Titled “Sip Your Sunshine,” the campaign kicked off on Monday with cable and network television spots plus digital and social media advertising, followed by a pop-up event scheduled for Wednesday morning in Manhattan featuring actress Ellie Kemper.

In a 30-second spot called “Breakfast Across America,” people drink Tropicana while interacting with family and friends at mealtime and non-eating occasions. “Every glass of Tropicana pure premium orange juice has a million little sips of sunshine,” the voiceover explains.

A 15-second version of the ad is titled “Celebrate Breakfast.”

While kids are prominent in both spots, the 70-year-old PepsiCo brand is seeking a wider audience, according to PepsiCo marketing director Mike Levy.

“What we want to do is connect with a group we call vibrant families. Specifically it’s adults, and this includes millennials without kids,” Levy tells Marketing Daily.

He further describes the target audience as people with a “positive, optimistic mindset, balancing responsibilities with families, friends, work and passions. They’re not specifically female. We see our demographic as more evenly split.”

The campaign is the first work from Cramer-Krasselt, which won the Tropicana account last year. It’s based in part on consumer feedback about lifestyles and the heritage of the brand.

“We’ve heard from consumers over the past year. We took a step back and spent time with them,” says Levy. “What we’ve heard is that Tropicana is a brand that can raise people up both physically and emotionally, while providing a bright and vibrant start to the day.”

The event with Ellie Kemper—in which Tropicana will provide free orange juice and breakfast sandwiches—will take place in a two-story popup facility adjacent to Bryant Park in Manhattan.

Playing on the sunshine theme, it’s meant to celebrate the infrequent phenomenon called Manhattanhenge, during which the rising sun “aligns precisely with the street grid, creating this amazing radiant glow of light that is framed perfectly by the city’s buildings,” according to the company.

Kemper is best known for her roles in the series “The Office” and “Unbreakable Kimmy Schmidt.”

The 7 a.m-to-noon event is being handled by MullenLowe PR.