The Impeachment Trial Is A Media Event, And You -- Not The Senate -- Are The Jurors 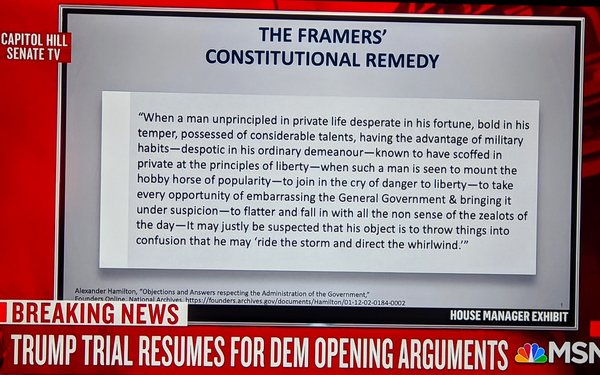 The President’s impeachment trial got off in earnest Wednesday, beginning with House Manager Adam Schiff putting one of America’s most popular media celebrities on the stand: Hamilton.

With the fate of living witnesses still an unknown for the trial, Schiff began the House’s opening arguments with a quote from Alexander Hamilton that seems oddly contemporary:

“When a man unprincipled in private life desperate in his fortune, bold in his temper, possessed of considerable talents, having the advantage of military habits -- despotic in his ordinary demeanour -- known to have scoffed in private the principles of liberty -- when such a man is seen to mount the hobby horse of popularity -- to join in the cry of danger to liberty -- to take every opportunity of embarrassing in the General Government & bringing it under suspicion -- to flatter and fall in with all the nonsense of the zealots of the day -- it may just be suspected that his object is to throw things into confusion that he may ‘ride the storm and direct the whirlwind.’”

Remind you of anyone?

According to Schiff, the current President’s actions were exactly what Hamilton was forewarning us about, and the reason the Framers’ drafted the impeachment clause in the Constitution, not to overturn an election, but as a “remedy of last resort.”

While the House has legislated to invoke that remedy, it doesn’t seem likely the Republican-controlled Senate is likely to, so the whole point of the trial isn’t to convince enough Republican senators to vote to convict and remove. It’s to convince the American public to do that.

Media is the only card the House managers have to play, and Schiff opened with some powerful content, reminding the live attendees and those watching on screens that if the actions of this President aren’t impeachable, “nothing is.”

“We are here today in this hallowed chamber, undertaking this solemn action for only the third time in history, because Donald J. Trump, the 45th president of the United States, has acted precisely as Hamilton and his contemporaries feared,” Schiff charged.

As far as I’m concerned, Schiff can rest his case, but I wouldn't mind hearing John Bolton testify.