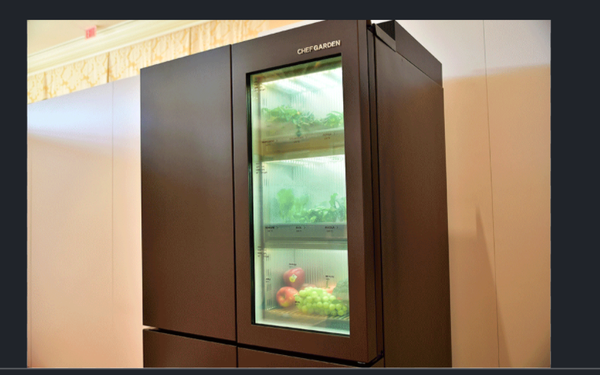 OK, we haven’t gotten that flying car. Still, step back a little, and it’s it’s clear artificial intelligence and other technology is churning out products in this day and age that could certainly impress the Jetsons.

For example, at the Kitchen and Bath Industry Show (KBIS) going on now in Las Vegas, Samsung is showing off its new Chef Garden. It’s a refrigerator that lets homemakers minimize the distance of farm-to-table to whatever it takes to get from the kitchen to the dining room.

The new Chef Garden fridge features a windowed section with its own door and place to plant a “wide variety of seed capsules” in the Growing Zone area. There, as Samsung explains, the capsules will  be treated to “fogponics technology to create a nutrient fog that delivers water and nutrients to the plants.”

Chef Garden then controls conditions so they’re just right for plant growth. It predicts growth and controls harvest. And at that point, the refrigerator, part of the Samsung Family Hub line, will recommend recipes based on the fruits and vegetables you just grew.

Unlike auto shows where manufacturers sometimes show off concept cars that will never be offered to the public, the Samsung stuff is for sale. But The Chef Garden should take a fair amount of green -- as in cash  -- to purchase, so it’s probably not for the budget-minded. Samsung has not yet released a suggested retail price.

Maybe these devices can catch the public’s imagination because they position household appliances now taken for granted differently, giving them brand-new uses.

Samsung makes it clear it’s now courting millennials, who have largely stayed away from the housing market so far, burdened by student debt, slow-rising salaries and long memories of the recession.

According to a survey from RTi Research, more than a quarter of millennials are interested in buying a home in the next year. They’re right at home with new technology that helps them save time and eliminate tasks.

Samsung claims it is now the nation’s number one appliance manufacturer, though it’s probably still best known for smartphones, TVs and laptops.

LG, the Korean electronics company that’s branched out to the kitchen and laundry room, has also launched smart refrigerators and a SteamDryer in its Ultimate Laundry Room.

LG is also showing off its True Sommelier, which helps wine lovers manage their at-home stock. Using a patent learning app from Wine Ring, the product figures out preferences and then make wine recommendations, including food and wine pairings.

Another innovation, the Samsung Whisk food platform (with the ViewInside camera), uses AI image recognition to figure out what’s in your refrigerator and use that information to recommend recipes.

Elsewhere, Samsung also announced the AirDresser, a vertical device that fits in a good-sized closet and uses steam technology to smooth out wrinkles, deodorize and sanitize your clothes, in small quantities. It takes 48 minutes to do the trick.