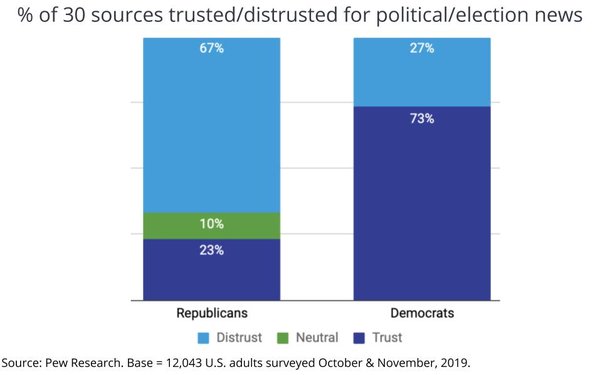 As if there was any doubt that Americans are politically polarized about their sources of news about, well, politics, a new study from the Pew Research Center should make it abundantly clear. The study, which surveyed more than 12,000 U.S. adults last fall found Democrats trust three-quarters of the news sources prompted in the survey, while Republicans said they trust less than a quarter.

The full study, which can be accessed here, includes detailed findings about the relative trust/distrust Americans of both political persuasions had for 30 sources of news ranging from network television news to Rush Limbaugh to The New York Times to The Washington Examiner to HuffPost.

Pew researchers acknowledged it was difficult to pick a list of news sources representing the entire marketplace and said these 30 outlets "were selected to represent popular media brands across a range of platforms."

However, you can see some top lines below and granular breakouts in the full report. The bottom line reinforces the notion in recent years that the political polarization of news outlets is reinforcing confirmation biases that are contributing to the current social and political discord in America.

The report also singles out one particular news outlet above all others as contributing to this polarization. In a section entitled "The Fox News Phenomenon," the researchers note: "In the more compact Republican media ecosystem, one outlet towers above all others: Fox News. It would be hard to overstate its connection as a trusted go-to source of political news for Republicans. About two-thirds (65%) of Republicans and Republican leaners say they trust Fox News as a source. Additionally, 60% say they got political or election news there in the past week."

The bottom line conclusion of the report is that Democrats appear to be open-minded and trusting of more news outlets falling across the spectrum than Republicans are.

"One of the clearest differences between Americans on opposing sides of the political aisle is that large portions of Democrats express trust in a far greater number of news sources," the report concludes. 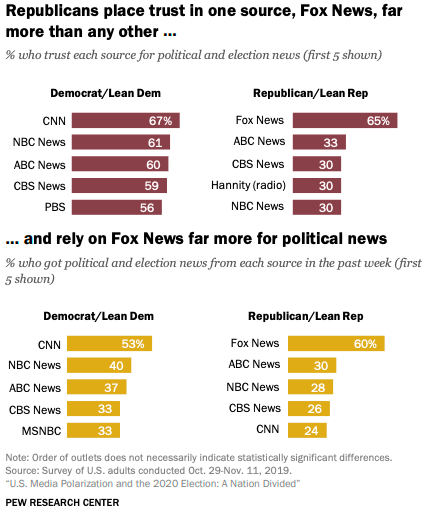